Dar Williams with Words of Wisdom

Last night, Dar Williams continued the theme of storytelling after last week’s narrative performances by Bobby Whitlock and “Behind the Lens” with Henry Diltz and Pattie Boyd. Dar shared her experiences from college, touring and raising her son, incorporating tiny bits of (comedic) wisdom in between songs.

Dar engaged with the crowd throughout her entire performance, which is just one of the many perks the Narrows Center has to offer. There was even a moment where she seemed to have lost her guitar pick in her blonde hair, only to have it recovered by an audience member in the front row. This got a big laugh out everyone.

As far as her music, Dar did not disappoint. Her voice echoed effortlessly, and full of soul, throughout the venue. Her guitar playing was accompanied by pianist Bryn Roberts, whose subtle harmonizing rang beautifully throughout many of Dar’s tunes.

She played “Crystal Creek,” “I Am the One Who Will Remember Everything,” and “This is Not the House that Pain Built.” Dar recounted the particular house in New Mexico that inspired this last song. It was built by the hands of a single mother, who Dar assumed constructed it out of frustration and grief of being alone. However, after finding handprints in the cement and a heart that framed the words “LOVE HOUSE,” Dar realized that there are other motivations (besides pain and suffering) that help us construct our lives. 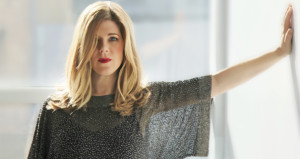 Last night’s opening act, “Mouths of Babes,” is worth checking out if you have never heard of them before. The band is comprised of two very talented female musicians, Ty Greenstein and Ingrid Elizabeth. Their stage set include guitar, upright bass, cajón drum and harmonica. These singer/songwriters wowed us with their clever, sometimes solemn lyrics and silly personalities.

“Are you guys having fun?” Ty asked the crowd between numbers. “Good because this next one is a downer.” 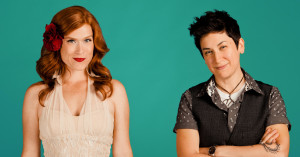