Bill Kreutzmann can barely contain his enthusiasm for 7 Walkers, the former Grateful Dead drummer’s new band with guitarist / vocalist Papa Mali, legendary New Orleans bassist George Porter Jr., and multi-instrumentalist Matt Hubbard. ‘I can’t believe how much fun I’m having playing with these guys!’ says Kreutzmann, who never missed a gig in the Dead’s 30 years together. ‘We’re making art together and having the best time.’ One listen to 7 Walkers’ self-titled debut album (Response Records / November 2, 2010) and it’s easy to understand why Kreutzmann is so pumped. With nearly all of its songs co-penned by Papa Mali and longtime Grateful Dead lyricist Robert Hunter, 7 Walkers is an electrifying hybrid of classic Bay Area rock and New Orleans funk. Kreutzmann calls it ‘swampadelic.’ 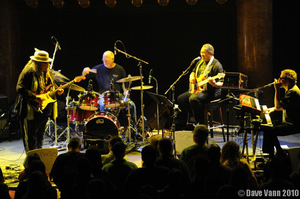