The Adam Ezra Group (AEG) is not just a band; they are a force to be reckoned with musically, personally and socially. Selling records and tickets is important to AEG, but they are committed to changing the world with their songs and their actions along the way. Ezra and his band are activists and community leaders as much as they are musicians and songwriters. Ezra has spent time living out of a van, farming in Canada, volunteering for the relief effort in Kosovo, and practicing environmental geography in South Africa. Whether as a kitchen hand or carpenter, teacher, athlete, or traveler, Ezra crams it all into the music, always challenging our perspective and often teetering somewhere between the ballsy rocker and sensitive poet. Through their non profit organization, RallySound, AEG helps people organize live music events that inspire communities and encourage grassroots activism. The group’s live performances, sweaty, passionate affairs that have been compared to those of Bruce Springsteen and the E Street Band, attracted the attention of Royal Avenue Records in 2010. Ezra immediately signed with Royal Avenue and began working on the album that eventually became Ragtop Angel. Royal Avenue paired the group with multiplatinum producer Aaron Johnson (best known for his work with The Fray) who has helped hone Adam’s ramblings into finely tuned songs that still retain the power and conviction developed from Ezra’s years of ‘do it yourself,’ grassroots work ethic. 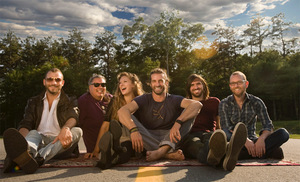