Adrian Belew is an innovative guitarist, singer, songwriter, multi-instrumentalist and record producer. He is perhaps best known for his work as a member of the progressive rock group King Crimson (which he fronted from 1981 to 2009) and his illustrious solo career. He has also worked extensively as a session and touring musician, most famously with Frank Zappa (‘Sheik Yerbouti’), David Bowie (‘Stage’ and ‘Lodger’), The Talking Heads (‘Remain In Light’), and Nine Inch Nails (‘Ghosts I-IV’). His 2005 single ‘Beat Box Guitar’ was nominated for a Grammy in the Best Rock Instrumental Performance category. Rounding out the Power Trio is Julie Slick on bass and Tobias Ralph on drums. The band sold out the Narrows in 2009 and we’re excited to have them back. 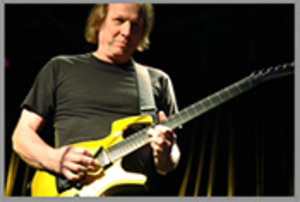