Riding the success of their debut CD, “Chance Meeting” on the Whaling City Sound label, the band members are taking a brief break from their many teaching and international performance commitments to re-group, challenge each other and delight the audience with their individual virtuosity, group improvisation and compositional skills.

AGNZ came together when Newport/Providence-based and Brown University Faculty Member bassist Dave Zinno and New Yorker drummer Adam Nussbaum met and played together on tour in Italy, and quickly decided that the instant chemistry and mutual respect deserved some serious follow-up. Nussbaum reached out to guitarist Azzonlino, another New Yorker, and Zinno recruited Berklee College prof saxman Govoni, to play a few gigs in Providence.

In addition to their serious chops and intense commitment, another aspect that makes this band special is that each is a composer and contributes to the music played each night. Results range from meditative and respectful to explosive, with many stops in between.

Writing about “Chance Meeting” in All About Jazz, Jack Bower notes their “…selflessness and comraderie among equals…” but that “…everyone digs in hard to reinforce Nussbaum’s freewheeling temper.” This spirit of equality and sharing is another trait that separates AGNZ from much other music with similar instrumentation and also allows the four individual artists the freedom to explore each other’s composition with fewer constraints.

As noted by reviewer Bower quoted above, the energy of the band is fueled by drummer Adam Nussbaum, who is the best known internationally of the four players. He has recordings and performances over more than 4 decades with greats ranging from the Allman Brothers to Stan Getz, Mike Stern, John Abercrombie, James Moody, Richie Cole and Michael Brecker, and he is a palpable force in the room.

Also known as a fiery player, tenor and soprano saxman Dino Govoni has a long-standing following from Providence through Boston and beyond. He was featured with the Boston Pops Orchestra in one of their famous televised July 4 Esplanade concerts, headlined the New Bedford JazzFest, and for many years has been both a leader and sideman at the Narrows Arts Festival. He has 2 CDs as a leader and is featured on countless others, and for many years has taught at Berklee College.
Guitarist Jay Azzolino, a former member of Spyro Gyra, shares the heady distinction with Nussbaum of having played with the late groundbreaking electric bassist Jaco Pastorius. Adept in many styles, on acoustic as well as electric guitar, Jay teaches at Manhattanville College and plays regularly in the Hudson Valley. His edgy compositions provide AGNZ with some of their more forward-looking offerings.

Bassist Dave Zinno is on an upsurge of recording activity lately, but he has been performing and recording throughout New England for just as long as his bandmates. In demand as a steady support for many vocalists, Dave is as comfortable in an Avant garde pianoless trio with George Garzone as he is in a duo with guitarist John Stein, quietly playing standards and bossa novas at Cork in downtown New Bedford. AGNZ provides Dave an unusual opportunity to step out and up into the group sound, a much more prominent and assertive role for the bass than is typical of much music today, both live and recorded. He takes great advantage, while never losing his beautiful, clear sound and masterful musicality. 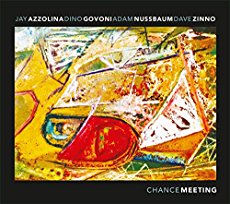