About the photographs:
The creation of this series of photographs began ( innocently-enough ) with a picture of cut daffodils, just beginning to open, in a vase in the photographer’s kitchen. A week later, the fading bouquet was bundled with an elastic bow and tossed out into the cold on a glass-topped patio table. As the flowers deteriorated, more pictures were made as time, light, and weather conditions affected the daffodils over the next six weeks, resulting an a wide variety of images. 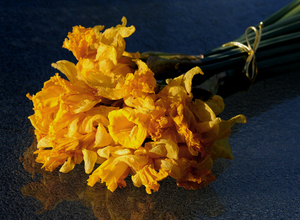