Perhaps not “all politics is personal,” but for Mexican born and raised drummer and composer Antonio Sanchez, who became a naturalized American citizen in 2016, the criminalizing of immigrants and the breathtakingly casual cruelty in the enforcement of border policies by the Trump Administration do feel personal, deeply personal.

“I feel so blessed and so thankful for what I’ve achieved in the United States,” says Sanchez. “But at the same time, I feel completely repulsed by what the United States is doing to immigrants — especially to people coming from the South. […] So whenever and wherever I’m performing, I’m speaking out, trying to make sense of what is going on.”

Not surprisingly, Lines In The Sand (CAM Jazz), his follow-up to last year’s remarkable Bad Hombre (CAM Jazz), is a passionate and eloquent statement from a superior artist and emerging social activist. In Lines In The Sand, Sanchez turns his anguish and anger into a moving musical statement, as much a protest against injustice as a tribute to every immigrant’s journey.

“With all the political turmoil and ethnic violence that is permeating the country and the world,” writes Sanchez in the liner notes for Lines In The Sand, “it’s been impossible for me not to pay much closer attention to what being a brown-skinned immigrant with a Latin name from a third world country means to me, as well as the implications for my family and my future children.”

“As I write these words [in July 2018], families are being torn apart at the US-Mexico border in a grotesque attempt to deter illegal immigration (which happens to be at a historical low). Small immigrant children being scarred for life by these inhumane policies keep reminding me of the millions of people that aren’t as fortunate as I have been and whose journey to come to this country sometimes becomes a matter of sheer life or death.”

Working with his band Migration — John Escreet on piano, Fender Rhodes and Prophet Synthesizer; Matt Brewer on acoustic and electric bass; Thana Alexa on vocals and effects and Chase Baird tenor saxophone and EWI — Sanchez builds, in some cases very explicitly, on the social and musical statements in Bad Hombre.

In “Bad Hombres y Mujeres,” which Sanchez calls “a kind of a reverse remix,” he took the bass line from the original tune, “which is a lot simpler in Bad Hombre, and turned it into this kind of almost symphonic piece.” Meanwhile “Home,” an instrumental piece in its previous version, is re-imagined here with lyrics by Alexa.

In fact, the voice is a critical element in Lines In The Sand. As in Sanchez’s earlier The Meridian Suite (2015), it is mostly treated like another instrument — now carrying the melody lines, as in the elegiac “Long Road,” now creating textures with the electronics or the keyboards, saxophone, and bass.

“I like to have that human element in my music,” says Sanchez. “Even though the saxophone can be incredibly lyrical, people can relate to the voice in a completely different level.” 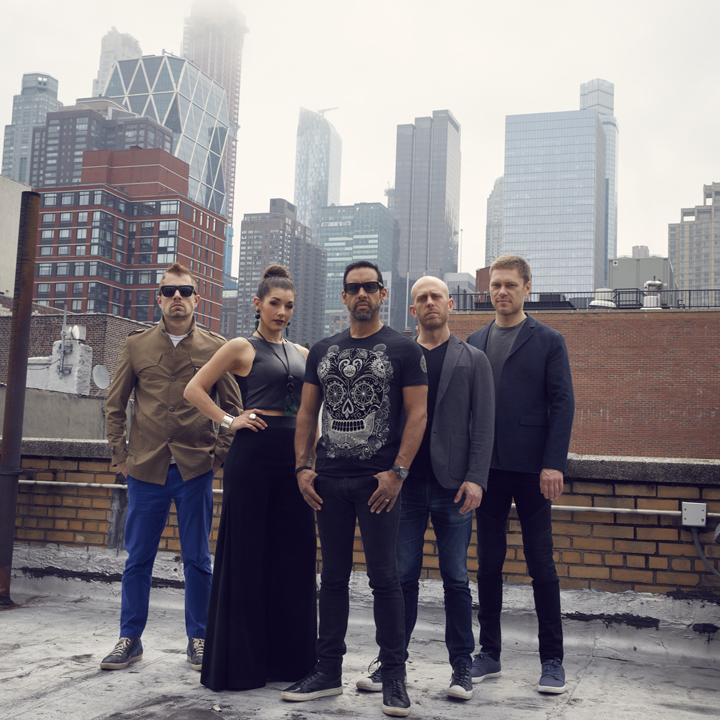