2013 marks the 20th Anniversary of Big Bad Voodoo Daddy’s remarkable arrival onto the music scene. In it’s first years, having secured their legendary residency at the Derby nightclub in Los Angeles, they reminded the world-in the middle of the grunge era, no less-that it was still cool to swing, big band style. Today the high-energy nine-piece ensemble continues the party and takes things to the next level with the release of RATTLE THEM BONES. The follow-up to the much lauded 2009 release, How Big Can You Get?: The Music of Cab Calloway, Rattle Them Bones still urges their millions of fans worldwide to shake and move to their inimitable grooves while also expanding their horizons with new musical inspiration and influence. Big Bad Voodoo Daddy hit pop music superstardom with their appearance in front of millions during the halftime show of the 1999 Super Bowl, while their 2003 New Orleans inspired album, Save My Soul, shifted focus to playing theaters, performing arts centers, and large outdoor venues to selling out shows at the Hollywood Bowl, Walt Disney Concert Hall, Lincoln Center, Chastain Park and Constitution Hall, to name just a few. The band often plays more than 150 shows a year and has appeared as special guests with many of the great American symphony orchestras including the Los Angeles Philharmonic, Atlanta Symphony Orchestra, National Symphony Orchestra, and U.S. Air Force Band. While Big Bad Voodoo Daddy has sold millions of albums, the stage has always been the band’s first home. ‘We make records because we have to, but play live because we love to,’ says Morris. Americana Deluxe was really the first album to capture what we were doing live and we strive to capture the energy and excitement of the live show in all our recordings. It’s amazing how the chemistry in this band still works after so many years. Whether on stage or traveling down the road on the bus, everyone is hanging out together, laughing and enjoying being part of such a remarkable enterprise and enduring friendship – one that is so rare in this business.’ 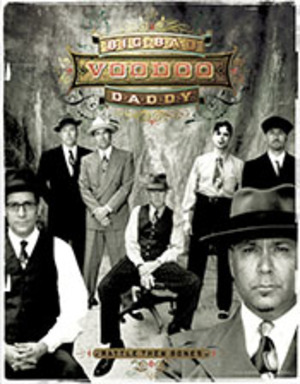