Big Sandy and the Fly Rite Boys and Girls, Guns and Glory

Two Narrows favorites for one night of rocking music. Twenty-five years, fourteen albums & hundreds of thousands of miles. What a dream it’s been. When I first got together for a garage rehearsal with a group of musician friends in the spring of 1988 in Anaheim, California, I never dreamed that I would someday be celebrating the silver anniversary of the rocking little band that formed that afternoon. Yet here I am, looking back over a wild ride that has taken us around the world countless times, that has put us in front of national television audiences, and – most importantly – that has given me the opportunity to play the music that I grew up having such a passion for – Rockabilly, Rock & Roll, Honky-Tonk, Rhythm & Blues, Soul, Doo-Wop… and now with the release of our new all-acoustic album ‘What A Dream It’s Been,’ even a touch of Jamaican Rocksteady. Putting together the new record for Cow Island Music has brought back a flood of memories; we went through our entire catalogue of LP’s, picked out some of our favorite original numbers, and gave them fresh new arrangements, rhythms, and instrumentations. In many ways, it was our way of looking back at everything that has led us to where we are now, while looking forward towards new musical horizons. Happy 25th Anniversary Fly-Rite Boys! Here’s to 25 more! Cheers, Big Sandy Girls, Guns and Glory is one of the pre-eminent Americana bands in New England. Great vocals, stinging guitar and a swinging rhythm section make these guys a band to watch. 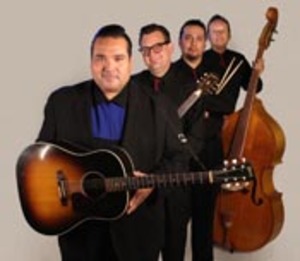