It’s been a decade since Rhode Islander Bob Kendall released his debut solo record ‘Enough is Enough’ on his own Kentonerecords label. The founding member of the bands Lifeboat, The Blood Oranges, The Brothers Kendall, and The Labor Pool has finally let go of this collection of songs written, self-produced and recorded in his backyard shed. The title track, ‘Midnight Flower’ features vocals by Tanya Donelly. (Belly, Throwing Muses, The Breeders) ‘Donelly adds a certain visceral, seventh sense ‘ and conjures up weary-wise tones of Lucinda Williams and Emmylou Harris’ (Influenza). Muses drummer, David Narcizo, once again provides his trademark style of hypnotic rhythms throughout the record. Kendall’s songs have been described as ‘telling tales of recrimination and self-deception’. Song styles and influences are reminiscent of Jeff Tweedy, Teenage Fan Club, Tom Petty, Ian Hunter, The Velvet Underground and Gram Parsons. Mixed and fixed by Kraig Jordan and mastered by Pete Weiss at Verdant Studios. 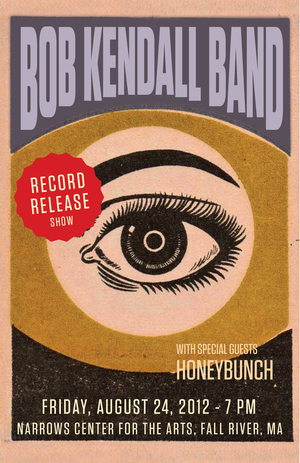