When Bonerama struts onstage with its four-trombone frontline, you can guess it’s not quite like any rock ‘n’ roll band you’ve seen. When they tear into some vintage New Orleans funk, there’s no questioning from which city these guys hail. And when those ‘bones start ripping into Hendrix and Led Zeppelin licks, all stylistic bets are off. Even in a city that doesn’t play by the rules, New Orleans’ Bonerama is something different. They’re not a traditional brass band, but they’ve got brass to spare-even with no trumpets or saxes in sight. They can evoke vintage funk, classic rock and free improvisation in the same set; maybe even the same song. Bonerama has been repeatedly recognized by Rolling Stone, hailed as ‘the ultimate in brass balls’ (2005) and praised for their ”crushing ensemble riffing, human-feedback shrieks and wah-wah growls’ (2007). Bonerama carries the brass-band concept to places unknown; what other brass band could snag an honor for ‘Best Rock Band’ (Big Easy Awards 2007)? As cofounder Mark Mullins puts it, ‘We thought we could expand what a New Orleans brass band could do. Bands like Dirty Dozen started the ‘anything goes’ concept, bringing in the guitars and the drumkit and using the sousaphone like a bass guitar. We thought we could push things a little further 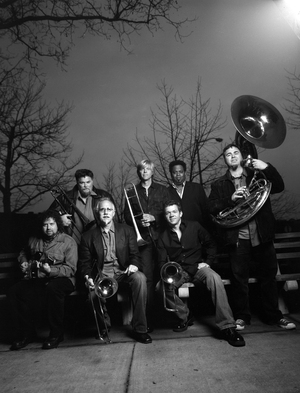