Boubacar Traore is a harmonious contradiction, a musician whose art and biography are striking not so much for their balance as for their extremes. An idol for the whole west coast of Africa in the 1960s, forgotten in the 1970s, rediscovered in the 1980s, and now touring once again in Europe and, for the first time, in North America in the 1990s. In the sixties, the people of Mali awoke each morning to his music on the radio. In the evening, they’d dance to it in clubs. They called him Kar Kar, from kari kari, meaning ‘one who dribbles too much’. The name has stuck ever since those soccer-playing days. His big hit, Mali Twist, served as a kind of national anthem for the newly emerging country of Mali, in 1963. In the song he called upon his compatriots to rebuild the country after independence. He was regarded alternately as the Chuck Berry, the James Brown, the Elvis Presley and the Johnny Hallyday of Mali, but because there were no music royalties paid, he rarely had enough money in his pocket for a pack of cigarettes. He turned to other kinds of work – tailor, a salesman, agricultural agent – and his music became something shared only with a close circle of friends. In 1987, he appeared on Malian television, surprising the whole country, many of whom mistook him for his older brother, also a musician, who indeed had died a few years before. When his beloved wife Pierette died suddenly that same year, Boubacar was lost in grief. He left for France, determined to earn enough money to support his 6 children at home. He worked construction jobs, and played guitar only within the African expatriate community there. A few years later a British record producer happened to hear a tape of a radio show Boubacar had performed on, and excitedly sent someone to Bamako to find him. The people in Bamako sent this emissary to Kayes, Boubacar’s home village in western Mali. There he learned that Boubacar wasn’t in Mali at all, but in Paris. They eventually tracked him down, and brought him to England to record two new albums. His career took on a new life. He toured in England, Switzerland, and Canada, and played select dates in the United States. Upon his return to Mali, a studio in Bamako, at the Revue Noir’s initiative, produced his third album, Les Enfants de Pierette (Pierette’s Children), with the participation of several big names in Malian music including Ali Farka Toure, Toumani Diabate and Ketetigul Diabate. Boubacar has continued to record new material and Rolling Stone magazine named his 2000 album Macire one of the top 50 albums of the year. ‘If guitarist Ali Farka Toure is Mali’s answer to John Lee Hooker, then Boubacar Traore is Mali’s Robert Johnson,’ wrote one critic, and with good reason. The sense of rhythm, space and time in Boubacar’s music cannot help but remind us of the seminal American blues figure. The roots of the music are in the distinctive Khassonke rhythms of the Kayes region in northwest Mali, but Arabic influences are also present. However, it would be a mistake to think he is simply a blues musician. Although there is a strong case to be made for connecting the historic links of American blues with the music from Mali, in fact the music of Mali incorporates a much broader spectrum than can be attributed to the branch that leads to our blues. To label him simply as a blues musician fails to recognize the magnificent traditions of this great African culture. If you do not take ‘blues’ as a form of music, but rather as a description of a feeling, you begin to discover the key to Kar Kar and his music. 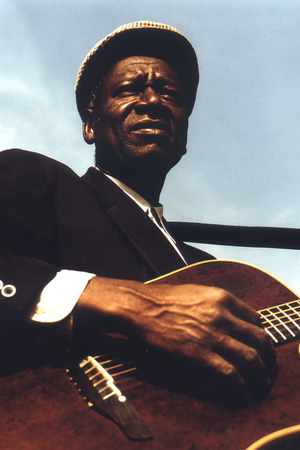