Bound and Unbound:
Book Portraits and Abstractions by Roger Kizik


Book ‘portraits’ and abstractions, the exhibition features these contrasting poles of work by Roger Kizik.
The books depicted – somewhat coveted and personal to me ‘ are a sporadic series, now ongoing for about 15 years, and a good ‘read’ of my eclectic interests. While the book imagery is anchored in the observed, it also propels me into the edgier territory of abstraction, where boundaries are less defined and doors are opened unexpectedly by visual ‘play’. Many of the abstractions here each constitute a game where the rules are groped through, explored, then carried over to the next opportunity [picture] – the ideas really do emerge from the making, and are somewhat self-sustaining.
My own dilemma is in being pulled back and forth by what I am surrounded by, and what percolates from within……..maybe I can have it both ways, maybe not: at least a show like this lays it out.
Roger Kizik Artist Reception will take place on Saturday, April 18th from 1:00 – 4:00 pm. The public is cordially invited. 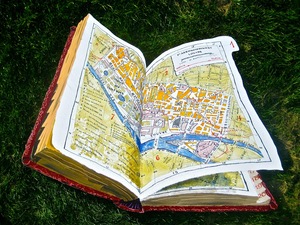