American musical legend Stanley ‘Buckwheat’ Dural Jr. – along with his band, Buckwheat Zydeco – is the preeminent ambassador of Louisiana Zydeco music. If you’ve gotten into Zydeco music, or felt its influence, or watched the world celebrate this great aspect of Louisiana culture over the past 30 years it’s likely been because of Buckwheat Zydeco. Bringing the unique sound of Zydeco into the musical mainstream, they released the first-ever major label Zydeco album in 1987, and claim the three largest selling Zydeco albums of all time. No other Zydeco artist has come close to selling as many records or exposing the music to more people around the world. Over the course of Buckwheat Zydeco’s career, Buck has gigged with everyone from Eric Clapton (with whom Buckwheat also recorded) and U2 to The Boston Pops. The band performed at the closing ceremonies of the 1996 Summer Olympics to a worldwide audience of three billion people. Buckwheat even performed at both of President Clinton’s Inaugurals. Recent national television appearances include PBS’s tribute to Paul Simon where Buck performed with Lyle Lovett; sitting in with Paul Shaffer on The Late Show With David Letterman (and playing ‘Hot Tamale Baby’ for Martha Stewart); and feting Ozzie Ozbourne among other’s on VH-1’s Rock and Roll Hall of Fame Induction Ceremony. Buck was recently profiled in a ten-minute feature by Scott Simon, on National Public Radio’s Weekend Edition Saturday. The band has appeared six times on Letterman, and on CNN, The Today Show, MTV, NBC News, CBS Morning News and many others. 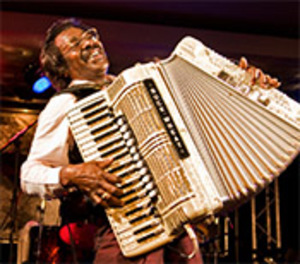