They call themselves Cabinet; I’d say they’re Everything But the Kitchen Sink. Roots, bluegrass, folk, country, Americana, rock, reggae, to name a few. Their sound is so eclectic, I can’t imagine a fan of any genre disliking their music. I left thinking to myself, “I don’t know what that was but I want more!”

Watching the band set up, I couldn’t help but notice how many instruments they had on the stage. I was also surprised, but mostly intrigued, to see a bluegrass band with a full drum set. Maybe I’m naive to the culture, and after being blown away last night I’m certain that I am and motivated to expand my horizon, but it seems typical bluegrass performers tend to rely more on their finger-plucking skills. I guess that’s why Cabinet can’t fit into a neat little cupboard. The irony is inevitable.

This band is anything but traditional, and I believe a part of that can be attributed to their uninhibited percussionist, Jaimi Novak, and his colorful experimentation with cowbells and blocks. Todd Kopec’s beautiful layering of more violin than fiddle was another sound that struck me in its versatility. This is not to discredit any of the other members’ musical skills. The band would not be who they are without JP Biondo on mandolin, Mickey Coviello on guitar, Pappy Biondo on banjo or Dylan Skursky on bass.

Cabinet has been together for more than ten years; they started before some of the members were even old enough to drink. Witnessing their pure joy and enthusiasm up on the stage, seeing how much a decade of dedication to the art has paid off, was truly inspirational. 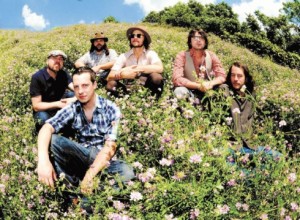 The guys are off to Jay Peak, Vermont, a town so far North your phone service will send you roaming texts because it thinks you’ve left the country. I find myself tempted to follow them there, just as you should if you missed out last night.

After the show, I heard multiple references of bands that Cabinet “must have been” influenced by. There was talk of the Grateful Dead, Bob Marley and Sublime. There was even a reference to jazz because, like the greatest jazz musicians, Cabinet has an incredible flair for improvisation. Many moments during the performance, smirks and distinguished glances were thrown about the stage, as the band members seemed to surprise even themselves. But despite their potential influence, it’s been agreed, Cabinet has a sound that is uniquely their own.