Their performances astounding, and diversity unparalleled, these three revered musicians are not actually natives of the ‘Golden State.’ The California Guitar Trio (CGT) is Bert Lams from Belgium, Hideyo Moriya from Japan, and Paul Richards from Utah. Together, their technical wizardry is breathtaking, as is the wide range of instrumental music the group renders… everything from unique originals to dazzling, cleverly-arranged interpretations of jazz, classical music, and even surf rock. Since their inception in 1991, the Trio has released 14 CDs: nine studio albums (including a Christmas record), three live releases (including An Opening Act from their 1995 worldwide tour with King Crimson), and two compilations. On screen, CGT can be seen in documentary Following the Music: On the Road w/ California Guitar Trio (??2004 Stone Chapel Films) and the new Hi-Def multi-camera shoot of an intimate house concert in 2009. In October 2010, the California Guitar Trio released Andromeda, an entirely new all-original album nearly three years in the making. It was named Best Instrumental Album that year by the Indie Acoustic Project. 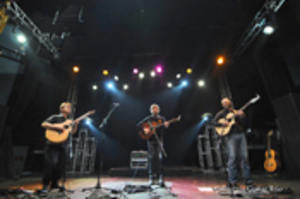