As Carbon Leaf approaches their 20th year of award-winning recording and touring, the band enters 2011 with more creative designs to independently produce a steady stream of new music. With nine albums under their belt, Carbon Leaf will release a live CD and DVD in early 2011, a full length CD slated for the Fall, and multiple songs and EPs throughout the year. The Richmond, Virginia-based group began as an independent band in 1992, then signed on with Vanguard Records for a three album stint in 2004. Along the way, Carbon Leaf scored hit singles at both AAA and Hot AC Radio with ‘Life Less Ordinary’ and ‘The Boxer,’ placed first in the International Songwriting Competition, won an American Music Award, and recorded the music for Universal’s Curious George II soundtrack in 2010. 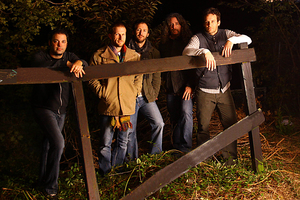