With their 2010 Nonesuch debut, Genuine Negro Jig-which garnered a Best Traditional Folk Album Grammy-the Carolina Chocolate Drops proved that the old-time, fiddle and banjo-based music they’d so scrupulously researched and passionately performed could be a living, breathing, ever-evolving sound. Starting with material culled from the Piedmont region of the Carolinas, they sought to freshly interpret this work, not merely recreate it, highlighting the central role African-Americans played in shaping our nation’s popular music from its beginnings more than a century ago. The virtuosic trio’s approach was provocative and revelatory. Their concerts, The New York Times declared, were ‘an end-to-end display of excellence… They dip into styles of southern black music from the 1920s and ’30s-string- band music, jug-band music, fife and drum, early jazz-and beam their curiosity outward. They make short work of their instructive mission and spend their energy on things that require it: flatfoot dancing, jug playing, shouting.’ Rolling Stone Magazine described the Carolina Chocolate Drops’ style as ‘dirt-floor-dance electricity.’ If you ask the band, that is what matters most. Yes, banjos and black string musicians first got here on slave ships, but now this is everyone’s music. It’s okay to mix it up and go where the spirit moves. 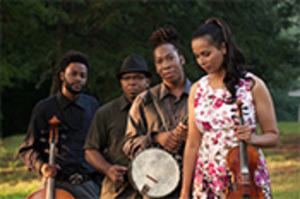