Under their banner ‘Forward with Scotland’s Past’, Battlefield Band have been a bedrock of talent for over four decades, and continue to lead the way for Scotland with their inspired fusion of ancient and modern traditional music and song. Scotland’s great flagship band are the musicians that others measure themselves against, and their new album ‘Line-up’ finds them fresh and invigorated, illustrating once again that they are among the most relevant contemporary composers and interpreters of Celtic music today. Founded by a group of friends in 1969 and named after the ‘Battlefield’ area of Glasgow, the band have now been touring & performing throughout the world for over forty years, playing to audiences in Europe, Australia & New Zealand, Asia, the Middle East & Canada, as well as more than 60 cities annually in the United States. Ever evolving; over the years new members have brought with them new ideas, music, instruments, attitudes and influences, leading to continued creativity, freshness and enthusiasm. The new line-up includes young multi-instrumentalist Ewen Henderson, and has been received with great acclaim on their US, Canadian & UK tours, as the group move on to a new, exciting period in their musical development. 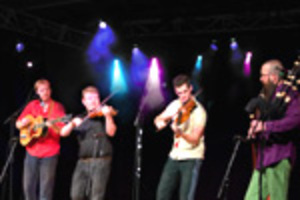