Charlie has released his second solo outing! Not since Solo Eight-String Guitar a decade ago has Charlie made a recording of just him and his guitar. This time, he’s down to 7-strings and is performing songs that are all public domain. The songs were all hand-picked by Charlie’s grandfather! ‘I was into doing a solo record for some time and just hit on the public domain idea. I figured I’d ask someone who actually remembered the tunes from his youth: My grandfather, Sidney Greenman. He was born in 1911 (yep, he’s 99). He helped pick the tunes for me. I recorded this in a day at The Bunker Studio in Brooklyn. Everything is live, there is no editing. Hope you like it.’ On this run Charlie will be accompanied by drumming master Scott Amendola. 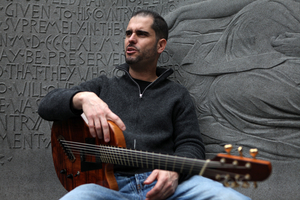