Not Getting Behind Is The New Getting Ahead, the renowned guitarist/composer Charlie Hunter’s new duo recording with drummer Scott Amendola, is an album that’s easy to get behind. A complete departure from last year’s Public Domain – a true solo album – and the previous year’s Gentlemen, I Neglected to Inform You, You Will Not Be Getting Paid – which incorporated two trombones and trumpet into Hunter’s instrumental arsenal – Not Getting Behind Is The New Getting Ahead (Release Date: October 2, 2012) is Hunter’s first recording of original compositions in three years. It’s also, perhaps, his most candid and forthright set of songs ever. ‘Our intention in making this record was to tell a bunch of stories around the central theme of the album’s title,’ says Hunter. ‘The new tunes are meant to evoke some of the things you might see in your travels through the USA these days. Scott and I wanted to think of each composition as a starting point for some kind of narrative.’ 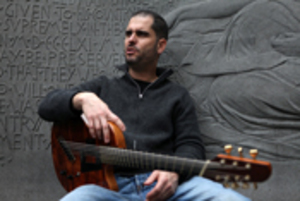