Charlie Hunter is a freak. For one thing, as at least one writer has noted, he has two brains, the only thing that can explain his prodigious output. He also has never seen ‘American Idol.’ Freaky. In addition, he’s a musician who has a vice-like grip on why he does what he does, which makes him super freaky. Yow. So Charlie Hunter became, and remains, a jazz shark of a sort. While certainly reflecting on what he’s devoured musically, he never stops to rest. It’s just not in his nature. Even in his Blue Note days, back when he thought it was important to adhere at least somewhat to the established but unwritten rules of jazz, he wasn’t content to be just another guitar virtuoso (my words, not his). He asked noted luthier Ralph Novak of Novax guitars to build him a seven-string guitar. He wanted to play the guitar and bass parts himself’sheer lunacy to be sure, but understandable. We’ve all met bass players.. But always he kept moving. The lineup and band configuration were kept malleable, allowing Hunter to shift easily from trio to quartet to duo. And shift he did. Grinding out an album nearly every year since 1993 on various labels (he made up for his laziness with some multi-album years), Hunter pursued solo, duo, trio, quartet, and quintet combinations (plus side projects like Groundtruther, Garage a Trois, TJ Kirk, and Pound for Pound) while experimenting with diverse recipes of instrumentation. Saxes, trombones, vibes’it all depended on where his evolution was taking him. You may still see (and hear) the ‘guitar guy,’ but compared to the fossils left behind from his earlier existence, the evolution is obvious. 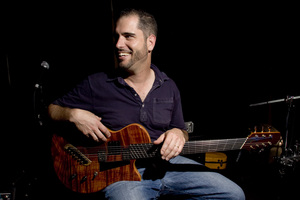