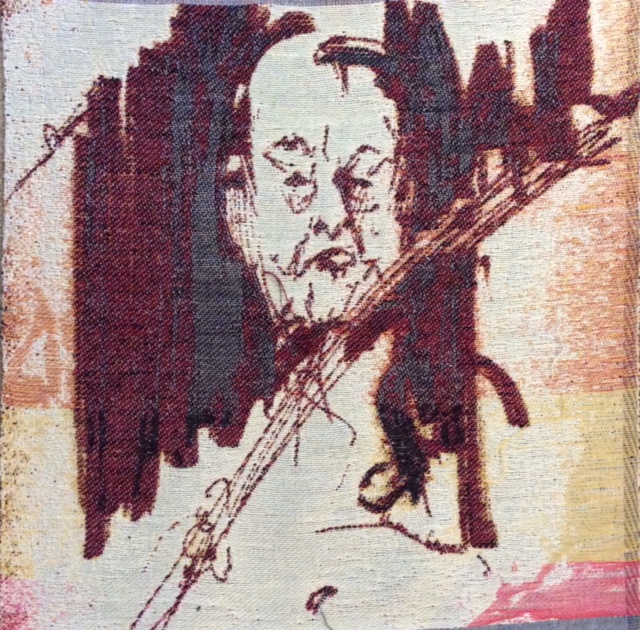 Color encourages inspiration.  It attracts attention, connects us to emotions or memory.  It can unite a vision or be a symbol.  Juxtaposed colors change our perception, speak together almost as a call and response.  Weavings and textile works can use color to create patterns like those in nature or music.  They can use color to twist or tickle our perception of space.  Woven cloth may be embellished with stitches, customized lace work, or shaped applique.  It may be folded to create multiple dimensions.  It may cast a shadow.  It may whisper a story, or yell one.

Laurie Carlson Steger (Image 1) has a background of melting glass in high-fire enameling that influenced her understanding of color, light and depth.  In her weavings, Steger uses color as a pixelation of hues to achieve illusions of dimensional space.  Color field compositions and figurative images take inspiration from musical sources. She works on a Thread Controller Jacquard loom and other loom styles.  She studied weaving at the Worcester Center for Crafts (1971), and the University of Massachusetts Dartmouth (BFA and MFA), where she explored weaving with optical fibers.  She worked with engineering companies as a consultant for ‘smart fabric’ materials, and has taught at regional colleges and weaver guild workshops.  Laurie and has exhibited her work nationally, most recently at The Fuller Craft Museum and Thousand Island Art Center, NY.  Laurie is a member of South End Woven Studio in Boston’s SoWa district and also belongs to national textile and weaving guilds.  She is the current Associate Dean of the Weavers’ Guild of Boston.

Paula Stebbins Becker (Image 2) received her BFA in Textile Design/Fibers from UMass Dartmouth and her MFA from Cranbrook Academy of Art in Bloomfield Hills, Michigan. Paula divides her time between creating artwork in her home studio and designing woven and printed fabrics for the decorative home furnishings textile trade. Her art work has been exhibited in group shows & galleries nationally, including; the Fuller Craft Museum, the Imago Gallery, the Narrows, the Attleboro Museum, the Reading Public Museum, the RISD Museum and the Cranbrook Art Museum. Her work is in the collection of the American craft collector Robert L. Pfannebecker, the Cranbrook Art Museum and Saarinen House. Paula’s textile designs have been manufactured by various American and Chinese mills and have been purchased by decorative jobbers; such as, Kravet, Robert Allen and Duralee, as well as Furniture companies, Century, Henredon and many others. In November 2015, Paula was a visiting artist at the Tainan National University of the Arts in Taiwan, where she taught a “Memory and Memorabilia” workshop and had a solo exhibition of her work. She has also taught as an adjunct professor in the textile departments at UMass Dartmouth, RISD and Philadelphia University.

Kate Barber (Image 3) has been creating textiles for over 25 years. She spent two years in the Advanced Textile Arts program at Capilano University in Vancouver, British Columbia and has studied with distinguished teachers throughout North America. After several years designing and weaving at the Silk Weaving Studio in Vancouver, Kate shifted her focus from weaving functional textiles to making textile art. She has shown her work in venues across the country and abroad, including: Fuller Craft Museum, Houston Center for Contemporary Craft, Craft in America Center and Gallery, Hinoki Gallery (Japan), the Schweinfurth Art Center, The Dedee Shattuck Gallery and the Jamestown Arts Center. She was awarded an open studio residency at Haystack Mountain School of Craft and her textiles have twice been selected by Fiber Art Now magazine’s annual “Excellence in Fibers” juried exhibition.

Her studio and home are in Exeter, RI. Website: katebarbertextiles.com

Ruth Buchman (Image 4) is fascinated by color and the versatility of the thread.  She received her Master Weaver certificate in 2005 from the Hill Institute (Florence, MA).  Her work has won awards at Complexity (Complex Weavers’ biannual show), the Blue Ridge Fiber Show, and the New England Weavers’ Seminar (NEWS), and has also been exhibited at the Fuller Craft Museum, Fine Contemporary Craft, and in Small Expressions (a Handweavers’ Guild of America show).  Ruth’s weaving has appeared in books and magazines, most recently Eight Shafts: Beyond the Beginning – Personal Approaches to Design (2022, ed. L.K. Autio).  She received the Deborah Berry Creativity Award from the Weavers’ Guild of Boston, the Weaver of Distinction Award from NEWS, and the Handwoven Magazine Award at Blue Ridge.  She is currently the Ratings Chair for the Weavers’ Guild of Boston, overseeing the Guild’s Apprentice, Journeyman, and Master Weaver programs.

Norma Smayda (Image 5) a Master Weaver, teacher, juror, exhibitor and author, trained in handweaving and related fiber arts in Norway.  While Norma’s earlier work was based on geometric forms, her current work breaks those lines, while still using color as a focus.  Working with three unusual fan reeds provides her with new ways to shift color and line. Norma received an MFA in Visual Design from the University of Massachusetts Dartmouth.  In 1974 she established and continues to run the Saunderstown (RI) Weaving School.  She has received the Weavers’ Guild of Boston’s Distinguished Achievement Award, the New England Weavers’ Seminar Weaver of Distinction and the Handweavers Guild of America Award for Excellence.  She has written two books, Weaving Designs by Bertha Gray Hayes: Miniature Overshot Patterns and Ondule Textiles: Weaving with a Fan Reed, plus numerous articles for weaving journals.

Jaimee Veronneau Roberts (Image 6)  studied Apparel Design at the Fashion Institute of Technology and Accessory Design at the London College of Fashion before falling in love with weaving 5 years ago. Using her patternmaking, leatherworking, and sewing skills, Jaimee’s weavings are both artwork to display and wear. Most inspired by museum days and vintage fabrics, Jaimee’s textiles are joyful and vivid. She is currently an enthusiastic student of Norma Smayda and the Vice President of the Weavers Guild of Rhode Island. 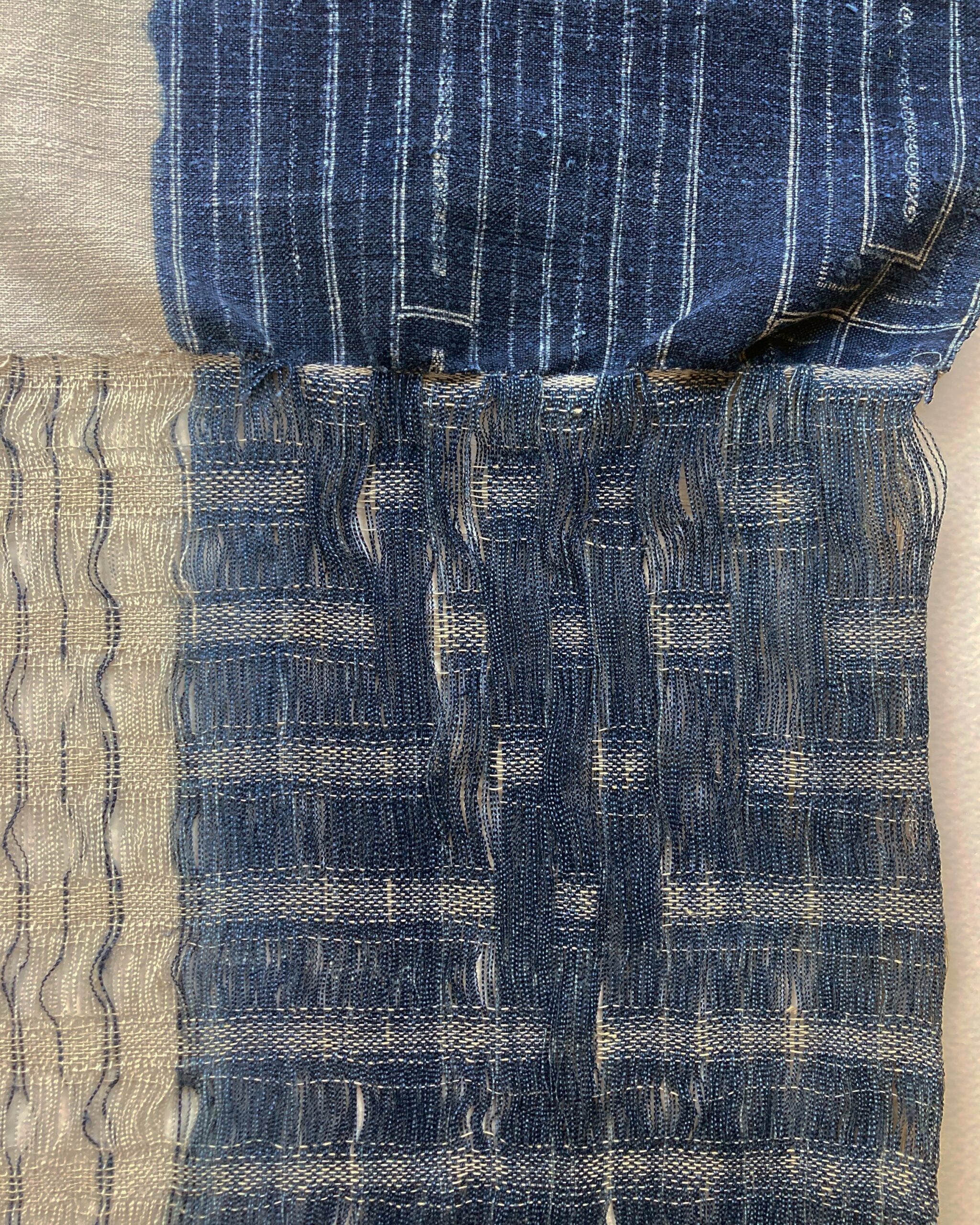 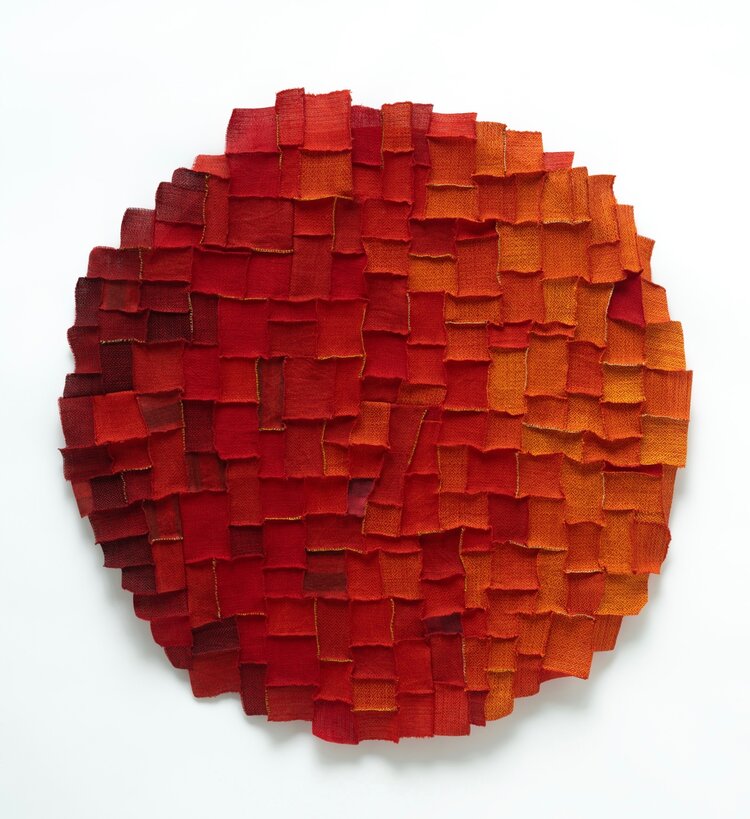 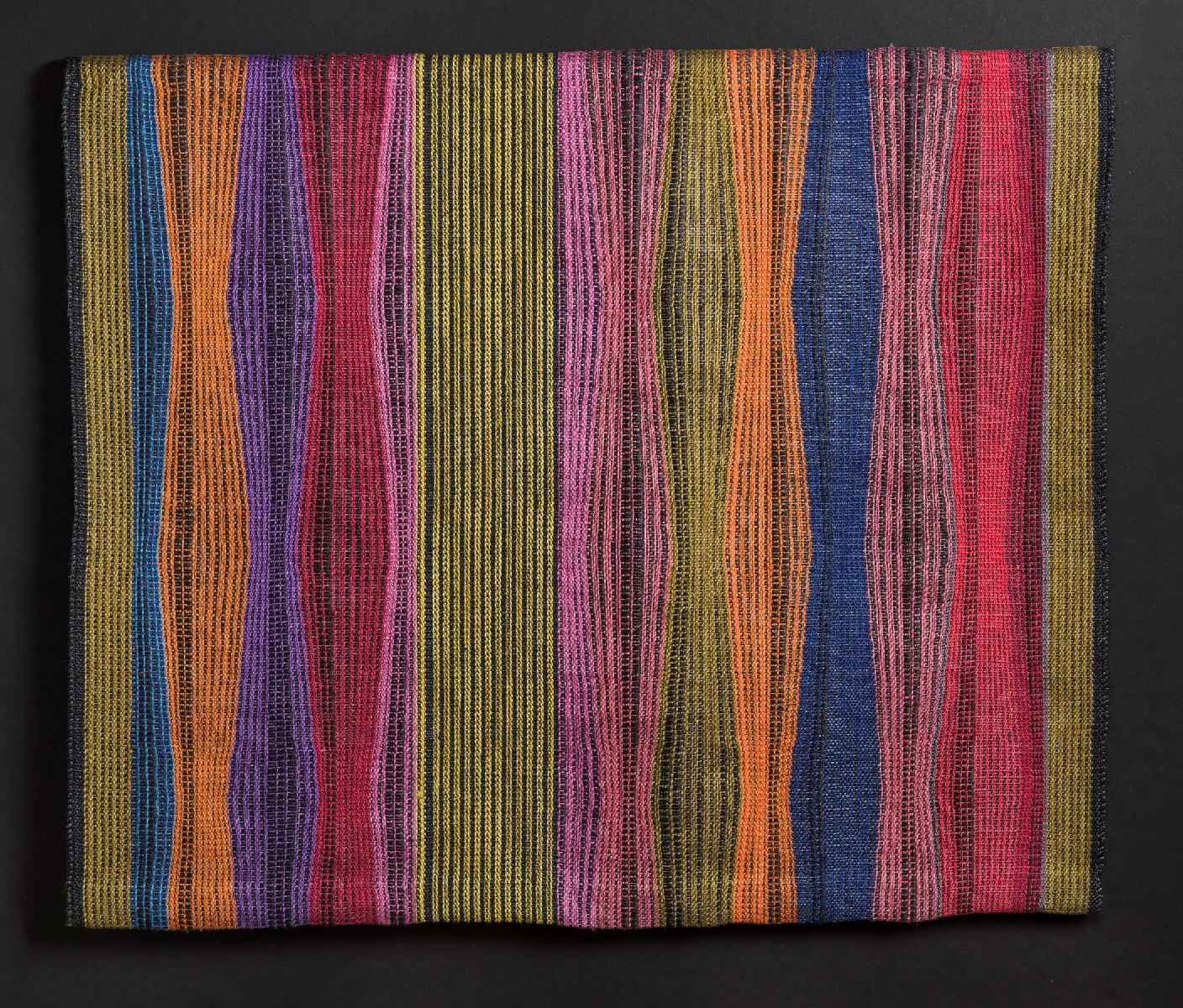 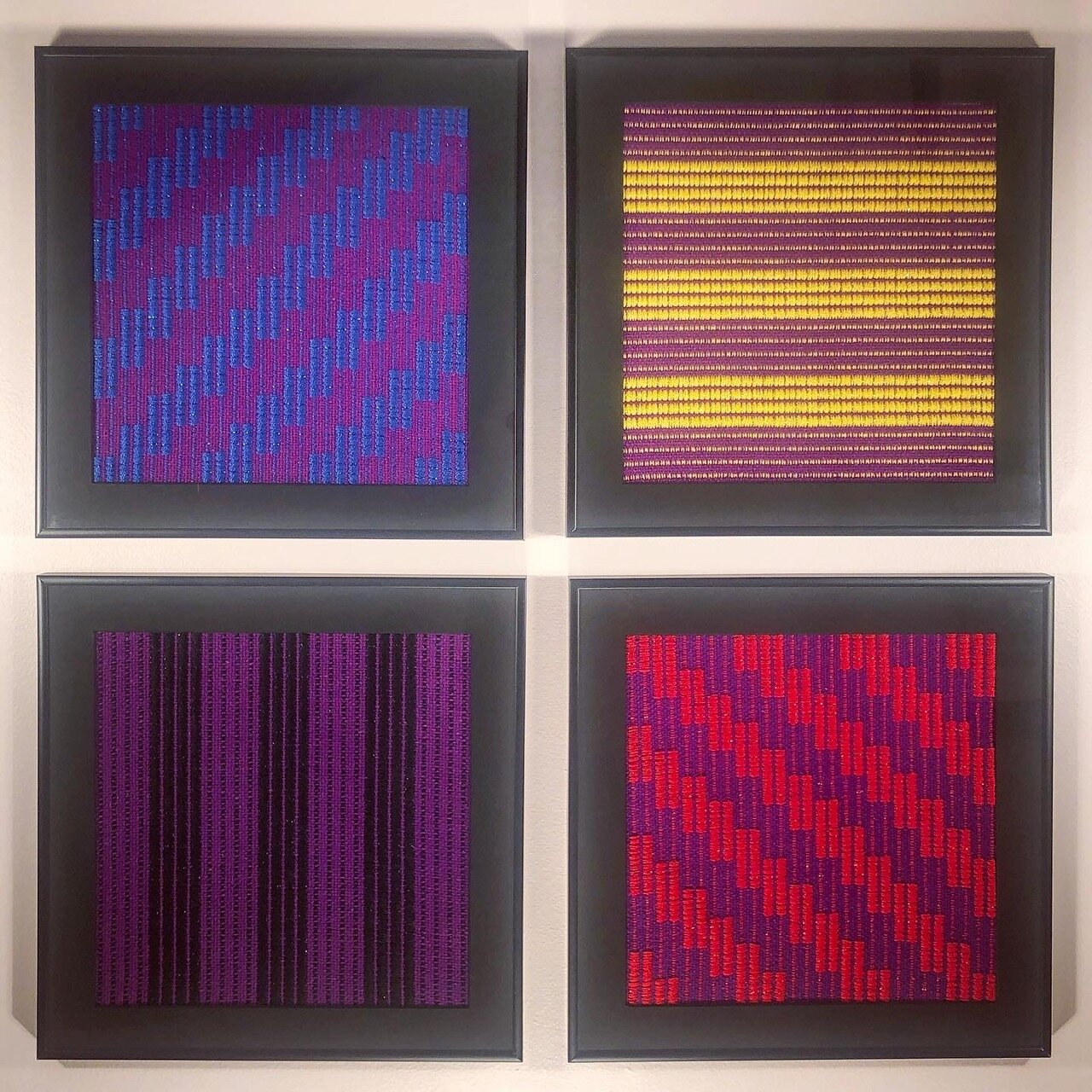