The exhibition Creation Myths marks the tenth anniversary of the Northeast Feltmakers Guild. In recognition of this milestone, ‘Creation Myths’ looks at Guild members’ expressions on the theme of creation: How can we explain our own creative process? What is our relationship to the archetypal creation stories that cultures around the world have told ‘ through myth, art, and storytelling ‘ through the ages, to attempt to explain ourselves and our place within the cosmos? And what does ‘creation myth’ mean in modern times ‘ perhaps informed by present-day ‘stories’ from science or psychology? This work represents Guild members’ explorations on this theme as each interprets it.
Creation Myths also celebrates the parallels between the medium of feltmaking ‘ an ages-old process of turning animal’s wool into fabric and object through the judicious addition of water and agitation ‘ and the phenomenon of myth. Both carry an element of alchemy ‘ the almost magical moment of transformation of the separate hairs of fiber into a whole, through specific movements of our hands’ echoing the alchemical power of myth to imbue ordinary objects and stories with profound meaning, transforming them into the symbols-of-the-sacred of a whole culture.
Both feltmaking and myth telling share a long history as traditions deeply rooted in a kaleidoscope of cultures around the world ‘ from the Middle East, to Asia, to the New World. They appear in history as answers to necessity: for needed fabric/structure to build homes (yurts), both functional and decorative objects, and works of art; and for symbols and stories to relay a civilization’s beliefs. Merging these traditions, the feltmaking artisans who preceded us through the centuries often decorated the surface of their felt with symbols of resonant meaning ‘ of earth, life, fertility, eternity. It is significant that we as contemporary feltmakers continue that history of necessity-innovation while exploring, in this body of work, both ancient and modern meanings of creation.
Participating Artists: Marjolaine Arsenault Cher Benda Teresa Berger Robin Blakeney-Carson Diane Christian Cheryl Christner Sharon Costello Marianne DuBois Temple Fawcett Judith Hesp Carol Ingram Vicki Jensen Daryl Lancaster Charlotte Moore Jeanne Noordsy Lynn Ocone Kirsti Sandoy Nan Travers Linda Van Alstyne
Image: Catylst
Artist: Diane Christian 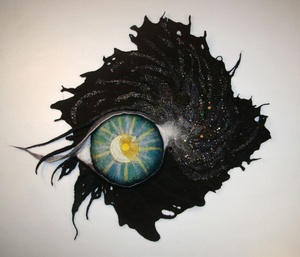