The works of five different graphic artist studios from across the country, Damn the Torpedoes depicts gig posters of performances and musicians far and wide.
Curator of the show Peter Cardoso is the owner of Ghost-Town studio. His design work has been featured in galleries across the country and has been seen in movies, magazines, on television and on walls around the world.
ghost-town.net
Nate Duval is a New England native and has been getting quite a name for himself as of late. He has exhibited his work at Forecastle Music Festival in Louisville, Renegade Craft Fair in Los Angeles and Chicago and Flatstock@Bumbershoot Music Festival in Seattle.
NateDuval.com
Mark McDevitt and Robert Lee of Methane Studios got their start in 1998 when they formed a partnership to produce silk screen posters for the East Atlanta club The Echo Lounge that featured some of the best independent bands in the late 1990’s.
The roots of this partnership started in the mid 1980s at Columbus College of Art and Design located in Columbus, Ohio. Robert and Mark, both from small Ohio towns, majored in Illustration and bonded over bad 80’s haircuts, corndogs, good music and creating art to form a friendship that would transcend into creating award winning artwork recognized worldwide.
Today they exist as a two man studio creating package designs, logos, and posters for clients such as Turner Broadcasting, Honda, Liberty mutual, Blue Q, Dave Matthews and many other of your favorite bands. Recently featured on CNN, you can also find their work in many books that feature designs relating to t-shirt, music packaging and of course posters.
MethaneStudios.com
Terrance ‘Lil Tuffy’ Ryan is a designer and artist living in San Francisco. Very few artists in the world have portrayed the delicacy, sensitivity and mystery of rock and roll show prints with the skill and insight of Lil Tuffy. In July 2002 an under-employed Lil Tuffy commenced designing and hand-screening posters to combat his self-diagnosed Attention Deficit Disorder. In November that year he was taken under the wing of living rock art legends Chuck Speery and Ron Donavan and their famous Firehouse. There he explored rock and roll psyche. More recently, Tuffy has been featured in Antiques & Collectibles and Gasoline magazines. His work was included in The Art of Modern Rock and featured in Panda Meat: Vol. 1 and Swag 2: Poster Rock of 90’s and Beyond.
Lil-Tuffy.com
Andrew Vastagh, aka BOSS CONSTRUCTION, is a one man design, illustration & screen print show, based in Nashville, Tennessee. Andrew designs and prints all his posters by hand, personally. As a graduate of the design program at The University of Memphis, Andrew wanted to avoid a corporate cubicle and focused instead on the freedom gig posters and freelance projects offered. He has worked on everything from T-shirt designs for Death Cab For Cutie to the recent identity and branding of The Warped Tour 2010 and projects with Wonka candy and KIA Motors. Andrew lives in Nashville with his twelve year old daughter Madalyn, and two mean chihuahuas Bonita & Echo.
BossConstruct.com 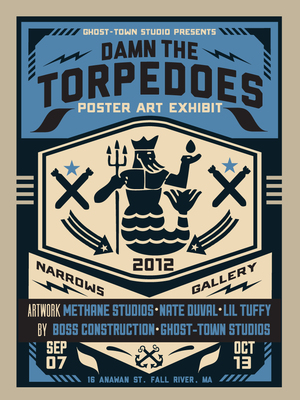