‘Darkness Falls’ is the collaborative work of Becky Haletky’s ‘Night’ watercolors and Lance Keimig’s ‘Night’ photographs featuring several Fall River landmarks. ‘This project was truly a labor of love for me. I have always been fascinated by the evening light, that magic time of day when the natural light fades and the man-made lights come on. Those precious few moments when the balance between the two is perfect has been something I have been striving to capture in my paintings for many years. Contrast and color shift, and the most mundane of subjects can take on a mysterious, dreamlike quality. My inclination toward the man-made landscape, or ‘manscapes’ as I call them, lends itself perfectly to this exploration of the evening light and beyond. Through my friendship with night photographer, Lance Keimig, I have gained a greater appreciation of the later hours, the dark of night, which is reflected in pieces like ‘Nite Owl’ and ‘Midnight, Munson Diner’. The city of Fall River has been an inspiration for several of the works in this exhibit. I am always on the lookout for pre-960 roadside architecture, and Al Mac’s Diner and the Nite Owl Diner were very exciting challenges. ”..Becky Haletky Becky Haletky has been painting in watercolor for 26 years. She is on the board of directors of the prestigious New England Watercolor Society, where she recently won the Stanhope Framers Award at their national open juried exhibit. Her regional and national awards total over 275, including Best in Show at the 2006 Pembroke Arts Festival. A recipient of numerous cultural council grants, her paintings are in the permanent collections of several south shore communities. Her paintings are featured in several publications, including ‘Best of Watercolor’and ‘Landscape Inspirations’, both published by Rockport Publishers. She illustrated her first children’s book for author Richard Wainwright in 2004, titled ‘Royal Koi and Kindred Spirits’. Becky has been teaching watercolor for the past 15 years at the Fuller Museum in Brockton and the South Shore Art Center in Cohasset. In 2005 she began teaching summer workshops in County Mayo, Ireland, and in 2008 will be teaching a workshop in Venice, Italy. For more information visit her web site at www.artbecko.com. ‘The images on display in the exhibit Darkness Falls are recent Night Photographs from an ongoing series entitled Millscapes, taken in and around old textile mills in New England. The images are made on black and white film with a large format view camera, and printed either digitally, or as traditional silver gelatin prints. Exposures are typically about fifteen minutes, but can be as long as an hour.”’Lance Keimig Lance Keimig is a photographer and educator who specializes in Night Photography. Inspired by the transformative and unpredictable quality of light after dark, Keimig has been photographing primarily at night for the past twenty years. He has exhibited his work since 1990, and is represented by the Pepper Gallery in Boston, MA, Simply Fine Art in East Bridgewater, Ma, and MDH Studios in Japan. Recent exhibits include the Commonwealth Museum in Boston, Adesso Boston, Fort Mason Center for the Arts in San Francisco, and a solo show at the Art Complex Museum in Duxbury, MA. A dedicated teacher, Keimig has been teaching photography since 1997, teaching at colleges, regional art centers, and through his own workshops in California, Massachusetts, and internationally. In 2003 Keimig founded the Mono Lake Photo Workshops in California, to promote interest in the fragile ecosystem of the Eastern Sierras through photography. Travel has always been an important part of Keimig’s work, which has taken him from Japan to Zimbabwe, where he documented the humanitarian efforts to provide medical care to impoverished peoples. Keimig also leads photo tours to Ireland and Scotland, and has two such trips planned for 2007. His photographs are held in numerous collections including The Art Complex Museum, The Boston Atheneum, The Boston Public Library, Fidelity, State Street Bank, Hitachi, Rayovac, and 3 Com Corporations. Examples of his work can be seen at: http://www.thenightskye.com. 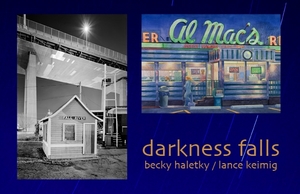