DAVID BROMBERG, DAVID HIDALGO & LARRY CAMPBELL IN CONCERT AT THE NARROWS CENTER FOR THE ARTS: FIRST TIME IS THE CHARM 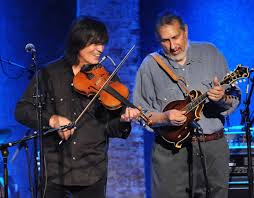 Was it a glorious alignment of the stars or a “simple twist of fate” that brought together, for the first time on stage, the acoustic string trio of David Bromberg, David Hidalgo and Larry Campbell? Whatever the source of inspiration, these three String Masters came together on January 29, 2015 and concocted a performance to remember. It was an amorous night for the sound of Martin guitars, sparkling mandolins and rhapsodic fiddling. It was a night of enthusiasm for acoustic music shared between a rollicking crowd, three gifted musicians and the unkempt beauty of their collective sound.

The icing on the cake was that this inaugural performance took place at the beautiful Narrows Center For the Arts in Fall River, MA. (“The Narrows”) (www.narrowscenter.org). The Narrows is a special place indeed. Founded in 1995, The Narrows encompasses a large performance space; working artists studios; two art galleries and a café – all located on the third floor of an old mill building with expansive views of Mount Hope Bay.

It is worth every mile trekked to get to it (from Boston, it is a little more than one hour’s drive straight down Route 24) because of its superb lineups, its stellar acoustics and its atmosphere of conviviality. The performance space at The Narrows is designed around a cavernous space in the old mill, where the stage is set up in the more narrow side of the room – allowing for sound to project from the stage into the vast open floor plan beyond (where spaces in the wooden roof and beam structure allow for even more natural decay).

The result is a room where sound flows effortlessly allowing for a natural sparkling character.  Instrumental and vocal colors and textures are heard distinctly, albeit with nice warmth. Also, great care has clearly been taken with developing the sound system to maximize a natural tonal balance where amplification and electronic interference is kept to a minimum. This allows for the superb articulation of low-level instrumental and vocal details in the room, as well for the mining of dynamic contrasts. The Narrows’ room possesses a live ambience that lets acoustic instruments and voices truly sparkle and shine to their fullest potential.

The Narrows’ limpid sonic qualities provided a perfect springboard for Bromberg, Hidalgo and Campbell to leap into their rich acoustic musical universe and never look back – to the thrill and adoration of the capacity audience gathered for this performance. Taking turns with song selection, these three Masters of Nylon covered the waterfront: from pile-driving acoustic blues to breakneck bluegrass to effusive Mexican ballads- all with collective glee.

David Hidalgo is one of the founding members of the band Los Lobos, and that band’s roots received some fertile watering in the hands of Hidalgo, Bromberg and Campbell as they played sparkling versions of Los Lobos’ “Will The Wolf Survive” and “The Neighborhood.” Hidalgo leaned back and sung these familiar tunes with a passionate baritone voice rising and falling beside his swift, nimble acoustic guitar. The quicksilver quality of the Narrow’s acoustic space allowed one to hear Hidalgo’s individual guitar style crisp and clear. He favored strumming and plucking his nylon strings so that he produced a compressed string tone, (almost like a “player piano” type effect) with great percussive quality. On another Los Lobos’ classic, “Tin Can Trust,” Hildago’s kinetic strumming lit up a steady rock beat behind Bromberg and Campbell, who joined him for this searing blast of blues and swing. On this particular cut, Bromberg displayed his own guitar styling: all curvaceous and full (compared to Hidalgo’s oblique angles) with a comic feel for the bottom end of his guitar’s register and the ability to roam up and down its frets with laconic ease. Here too was Campbell on his sparkling mandolin: slicing and dicing with bladelike articulation to keep “Tin Can Trust” swinging with delectable joy and mercurial light. Similarly, on a spirited version of Lead Belly’s “Take This Hammer,” Campbell’s mandolin partnered in light chaos with Hidalgo’s sputtering fast guitar licks, (sounding like baseball cards spinning in a bicycle tire).

Campbell moved effortlessly from playing guitar, mandolin and fiddle- all with an unerring touch for melodic phrasing and unfolding lines. At one point, he took the stage himself to perform an instrumental guitar solo entitled “Blind Mary,” (originally composed in the 17th Century by a blind Irish songwriter named Turlough O’Carolan and re-worked on Campbell’s 2005 solo acoustic recording, Rooftops [CDBaby]). The lush and tender piece was all grace and dignity in Campbell’s impeccable touch. Similarly, on the “Warfield Waltz” (Campbell’s original composition dedicated to the now-closed Warfield Theatre in San Francisco), Campbell’s fiddle rose and fell with a soulful tone with Hidalgo lending a soft hovering voice on his airy accordion (moving in and out of the fiddle’s sweet lament).

Campbell also displayed his vocal prowess sustaining long held phrases in dramatic duet with Hidalgo on a Mexican Ranchero and busted out with forceful lead on “Big River,” roiling and churning his vocals (like the best of Bob Weir on one of many of the Grateful Dead’s exuberant renditions). On “Big River,” Bromberg unleashed one of his best guitar solos of the night. Although he had a few isolated miscues earlier on in his solos (in trying to keep pace with frenetic rhythms of a few tunes), on “Big River” he found his masterful solo touch by moving in hot spanking notes up and down his fluid register with deep bass hits contrasted with light high runs.

The chemistry between these three superb musicians came to a radiant confluence when Bromberg took up his guitar to commence a bracing and brilliant performance of “Dehlia,” a classic slow-boiling blues number that Bromberg first recorded on his solo album in 1972 for Columbia Records.

As Bromberg rambled in the deep trough of his powerful voice, he played slow prankish notes on his guitar, taking time for long pauses to emphasize the drama and emotion of his tale. Bromberg’s voice was a treasure trove of creative expression: it could fill with deeply powerful sustained phrases (as he displayed on “Take This Hammer”) or rise and fall with improvisational playfulness, as in the walking gait of “Dehlia”. Campbell and Hidalgo were perfect foils for Bromberg’s virtuosity as they added their own colors on slide guitar (Campbell) and accordion (Hidalgo). They laid down  a soft twinkling; a shot of resonant adrenaline and a pool of light under which Bromberg worked his minstrel magic. In the soft, charged conclusion of “Dehlia”, you could hear a pin drop in the quiet spaciousness of The Narrows as Bromberg, Campbell and Hidalgo sent their vision aloft on a final, self-assured whisper of nylon and air.

For a schedule of upcoming shows at The Narrows, see all details at www.narrowscenter.org. An amazing lineup beckons for the winter and spring at The Narrows, including a rare performance in this area by Louisiana guitarist Tab Benoit; beautiful songstress Kat Edmonson and more blues magic from the likes of Jimmie Vaughan, Dave Alvin and Jorma Kaukonen.