For more than 40 years, mandolinist/composer David Grisman has been busy creating ‘dawg’ music, a blend of many stylistic influences (including swing, bluegrass, latin, jazz and gypsy) so unique he gave it its own name. In doing so, David has inspired a whole new genre of acoustic string instrumental music with style and virtuosity while creating a unique niche for himself in the world of contemporary music. Praised for his mastery of the instrument as well as his talents as a composer, bandleader, teacher and record producer by the New York Times, David’s role as an acoustic innovator continues to grow. After recording for several major and independent labels, Grisman founded his own company, Acoustic Disc, which he runs from his studio in northern California. After launching the label in 1990, David entered the most prolific period of his distinguished career, producing over 50 critically acclaimed, high quality recordings of acoustic music (five of which have been nominated for Grammy Awards). Today his discography includes recordings with Bela Fleck, the Grateful Dead, Stephane Grappelli, Emmylou Harris, Chris Isaak, Dolly Parton, Bonnie Raitt, Linda Ronstadt , Earl Scruggs, Dan Fogelberg, Maria Muldaur, John Sebastian and James Taylor. 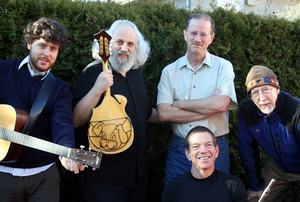