When future music historians look back at the strong currents circulating between the Americas in the 21st century, they will find Los Lobos, Calexico, and a charismatic, lanky Missourian singing tight harmony with a Southern belle rattling the jawbone of a donkey. David Wax and Suz Slezak form the artistic core of the David Wax Museum, and together they fuse traditional Mexican folk with American roots and indie rock to create a Mexo-Americana aesthetic. Combining Latin rhythms, infectious melodies, and call-and-response hollering, DWM was hailed by TIME for its ‘virtuosic musical skill and virtuous harmonies’ and has built a reputation among concertgoers all over the U.S, Canada, Europe and China for ‘kicking up a cloud of excitement with their high-energy border-crossing sensibility’ (The New Yorker). With the release of Knock Knock Get Up (September 2012), David Wax Museum has reached a level of cross-cultural integration and musical fluency that allows them to speak electrifying and heartfelt poetry with a tongue that is wholly their own. 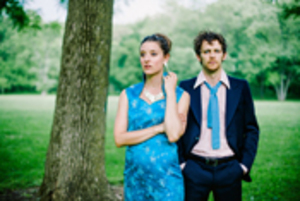