David Wax Museum, ‘one of Boston’s hottest new bands’ (The Boston Globe), fuses exuberant Mexican roots music with homegrown country, folk and rock to create a unique Mexo-Americana sound. With Latin rhythms, call-and-response hollering, accordion pumping and donkey jawbone rattling, they have won over audiences across the country. After making a splash at this year’s Newport Folk Festival, NPR’s All Songs Considered featured their performance as one of the highlights of the festival. They have toured nationally with The Avett Brothers and the Old 97’s and shared the stage with the Carolina Chocolate Drops, Ben Kweller, The Low Anthem and Nathaniel Rateliff. David Wax Museum receives consistent play on XM Sirius Radio’s Acoustic Coffeehouse; The Boston Globe selected the band’s album Carpenter Bird for its top 10 local albums of 2009; and NPR recently featured them on a segment about Mexico-centric indie rock. A new album produced by Sam Kassirer (Josh Ritter, Langhorne Slim, Erin McKeown) will be released in February 2011. 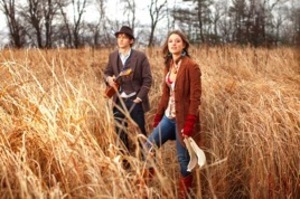