Dayna is a remarkable singer songwriter. She has a voice that is equally at home singing blues, jazz, folk etc. Critic James Reed of the Boston Globe wrote in a review of Beautiful Yesterday that ‘there’s no logical reason why singer-songwriter Dayna Kurtz is not a full-blown star.’ I couldn’t agree more. A self-proclaimed ‘failed scholar and modern-day hobo,’ 24 year-old Caroline Rose has broken her long string of short-circuits with a live-wire national debut, I Will Not Be Afraid (August 19th / Little Hi! Records) that draws on her roots in rockabilly, vintage country and blues to capture her unique and personal vision. Hoping to escape the dead ends that befell her hometown, colloquially dubbed a stop on ‘heroin highway,’ Rose found her way out via a full ride to a small liberal arts college, where she failed as a scholar, barely scraping by to graduation. Next came a stint as a failed hippie, working on and leaving an organic farm. She then bought a vintage sports car to travel the country, but it quickly broke down. On the plus side, Rose got a job at a cider distillery, where she got to taste apple brandy and applejack all day…Followed by a stint stocking shelves and sweeping floors at a grocery store for a boss who eventually fired her. 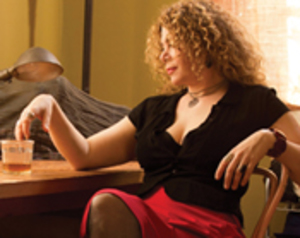