A little bit country, a little bit rock n roll, and easily my favorite performance thus far, Girls Guns and Glory blew the roof off Saturday night and they did it in style. Ward Hayden, lead vocalist and guitarist, with the voice of a southern Lyle Lovett and the dance moves of Elvis Presley, knew exactly how to turn the audience on.

Drummer Josh Kiggans and bass player Paul Dilley kept the crowd on beat with their high energy and groovy rhythm. Lead guitarist, Chris Hersch proved to be no stranger to vocals, wooing us with a quirky song about truck driving, which reminds me. The guys are currently looking to raise funds for a reliable tour van. You can donate to their cause by clicking here.

Saturday night was a fun show that attracted a younger crowd than usual. Our opening act was a local band from southern Rhode Island, who drew in many loyal fans at the door. The Little Compton Band played a memorable set, resonating a new age roots rock sound. It was a little funkier, perhaps more of a 60s hippie vibe, compared to that of our headliner band. 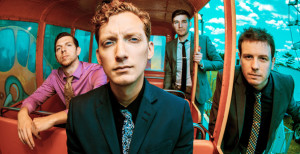 During both performances, the mill echoed with the hoots of some excited girls up front. Many of these groupies, dressed in their cowboy hats and boots, danced around and had a few good laughs during the Girls Guns and Glory set. Their name certainly suits them well, except for the Guns part, but there’s a rule against firearms inside concert venues, anyway.

It obviously wasn’t the band’s first rodeo and certainly not their last. All four of the GGG guys were so cool and confident up on stage. They exuded such a strong presence of 50s fame and glory. Just think, James Dean meets Clint Eastwood in Man With No Name. I expect to see them selling out much larger venues in the near future, and I can’t wait to say that we had them here first, at the Narrows, in the most intimate of settings.