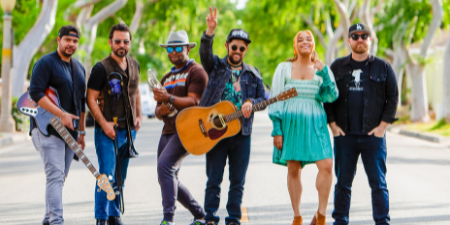 BUY TICKETS
Dustbowl Revival has always been about pushing the boundaries of what American roots music can be. After celebrating over a decade of sonic adventuring and playing thousands of shows together in ten countries and counting, the group collected a devoted fanbase coast-to-coast. After throwing five of their own virtual Sway-At-Home festivals during the shut-down featuring nearly forty artists, the always evolving group of string and brass players led by founding members Z. Lupetin, Josh Heffernan, Ulf Bjorlin are excited to welcome a new wave of talent to the band, after emerging from a pandemic touring hiatus.

Even so, with the bands emotional new single “Beside You” and 2020’s ambitious full length Is It You, Is It Me, they wanted to strike into new terrain. As they mined new energetic material from the place where folk and funk music meet, they teamed up with producer Sam Kassirer (Lake Street Dive, Josh Ritter) and engineer Brian Joseph (Bon Iver, Sufjan Stevens). The latest album strikes a more personal note than ever before, representing the latest stage in a band that never stops exploring new sounds.

Many of the songs feel like small theater pieces coming to life verse by verse. It’s the yin-yang conversational harmony that is the true specialty of lead songwriter and singer Z. Lupetin, who also doubles as a playwright and recently wrote the music for a Greek tragedy set in Gold Rush era California. While longtime co-lead Liz Beebe has stepped away from the band after a long run, an amazing young talent in Lashon Halley has stepped in to bring new life to the songs, matching Lupetin’s intense vocal range with her own.

With a big brass-and-strings band building around the voices, Is It You, Is It Me isn’t afraid to explore the personal and political tension that the group may have shied away from facing before. The album tackles uneasy topics, often where the political feels personal, especially in the defiant “Get Rid of You,” which was inspired by the student activists who emerged from the tragic Parkland High School shooting in Florida. The ominous driving brass groove of “Enemy,” hones in on a painful generational split between a daughter and her parents who may have voted in a tyrant, and have become strangers to her. This yearning search for common ground pervades the record as a whole.

“Maybe we don’t know where this journey will take us or how long it will last,” acknowledges Lupetin, “That’s my take on the importance of what we try to do. Music elevates us, lifts us up, makes us change our minds, takes us out of our comfort zones. If just one person can be moved by just one song, that’s enough.”

About the opener, Smooth Hound Smith:

The saga of Smooth Hound Smith begins in Southern California. It winds from there through countless club gigs to East Nashville, big-time arena shows opening for The Dixie Chicks and finally to a third album, on which the seeds planted by experience blossom into a sound unlike that of any other artist.

Dog In A Manger is the third effort from husband-and-wife duo Zack Smith and Caitlin Doyle-Smith. While their previous releases evince their unique vocal blend and ability to coax compelling music from minimal instrumentation, Dog In A Manger brings it all to a higher level of expression.

There are reasons for this, the first being their musical and personal synchronicity. They began building their bond in Los Angeles, when Zack sat in with Caitlin’s band. He was working as a bartender and playing bluegrass gigs on upright bass in addition to working solo as Smooth Hound Smith. She had grown up in Fresno, studied at the L.A. Music Academy, earned her degree at the Academy of Contemporary Music in England and returned to Southern California. When he sat in one night with her band Dustbowl Revival, something clicked. By 2013 she was supplementing his one-man-band, guitar/drums/whatever and singing with complementary vocals and percussion.

Cultural arbiters took note. In response to their eponymous debut album, No Depression marveled that Smooth Hound Smith’s “raucous clash of backwoods folk, raw blues and underground rock … generates enough power to fuel a full band.” A few years later, Ken Templeton extolled one of their shows for Red Line Roots, noting “Zack’s blistering guitar playing” and adding “I saw lots of folks shut their eyes just to take it in that much more.”