Over two decades, McCain has morphed into a road warrior, gigging throughout North America most of each year. Reflecting on his collaboration with Maia Sharp on Mercy Bound, McCain says, ‘Sometimes I think your ego tricks you into thinking, ‘I have to write everything,’ but no, you don’t have to write everything, you just have to love it.’ Mercy Bound also marks two decades since McCain first entered a studio. Raised in Greenville, S.C., on a musical diet of everything from Earth, Wind & Fire to David Wilcox, he recorded his first independent demo in 1991, issuing his debut, Solitude, two years later. That album led to his 1995 major-label debut, Honor Among Thieves, which introduced America to the then-budding Southeastern bar favorite. Songs like ‘Solitude’ and ‘3 a.m.’ remain fan faves and live staples. Two years later, he broke into the mainstream with the sweeping ballad ‘I’ll Be,’ from the album Misguided Roses. Largely captured in no more than two takes, the songs on Mercy Bound were recorded at the Lair Studio and Sharp’s home studio in Los Angeles, with some additional tracking done in Greenville, where McCain lives with his family. Mercy Bound also features a co-write with Angie Aparo (‘Better Story to Tell’). The title track was written by Mark Addison and the guitar-and-vocals-only closer, ‘Lucky One,’ was written by Anders Osborne. It features the guitar talents of McCain’s old friend, Warren Haynes (Allman Bros., Gov’t Mule), and such lyrics as, ‘I can’t explain why I’m here today/I’m just thankful that I am. Every day I wake up to see the sun/I thank God that you still think I’m the one.’ 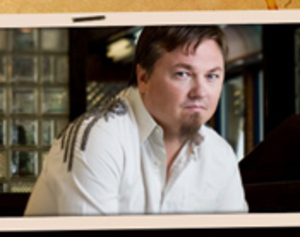