Eleni Mandell explores the joys and trials of being a mother to young twins with the help of Nick Lowe’s crack backing band and producer Neil Brockbank on her new album ‘Let’s Fly a Kite,’ out January 28 on Yep Roc Records. Her second for Yep Roc, the album sees a standard-bearer of the L.A. singer-songwriter scene offer a window into her new parental role through characteristically wry lyrics, noirish vocals and sunny, orchestral-pop arrangements. While on a tour with Nick Lowe, Eleni became fast friends with Nick’s producer Neil Brockbank and agreed to make this album together. Mandell went to London and cut it with Brockbank and members of Lowe’s band, including Geraint Watkins (keyboards), Matt Radford (bass), Robert Trehern (drums), Martin Winning (wind instruments) plus Greg Townson of Los Straitjackets on guitar. Says Lowe: ‘She stole my band and my sound, but I’d still have her ’round for tea.’ Eleni also brings her children on all of her tours, criss-crossing the country and overseas with her twins in tow. The two-steps, waltzes and weepers on ‘Let’s Fly a Kite’ take inspiration from years past, but here Mandell is a thoroughly modern woman. ‘Put My Baby To Bed,’ based on a phone call she had with her babysitter, shows her flair for writing about her children in a way that’s broad enough to let listeners project their own romantic meanings over timpani, upright bass, jazz clarinet and plucked strings. The swinging ‘Wedding Ring,’ cleverly addressed to the titular inanimate object, is a sendup of marriage (or rather people who desperately seek it). Occasionally she does consider romance, like when she tries to take a platonic relationship a step further on ‘Love Never Acted’: ‘I like bourbon on ice every now and again / I hoped you’d partake so this friendship could end.’ Eleni signed to Yep Roc for 2012’s ‘I Can See the Future,’ which was produced by Joe Chiccarelli (The Shins, The Strokes). She’s been compared to Chrissie Hynde and PJ Harvey by Spin, early Elvis Costello by Rolling Stone, and Joni Mitchell by Paste; as The Los Angeles Times puts it, Mandell is ‘gifted with a voice that’s as smoky and coolly moderate as a chanteuse secreting a pearl-handled revolver beneath her dress in a noir novel.’ 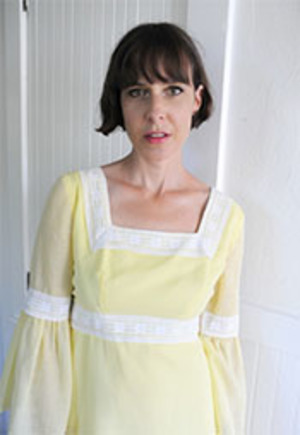