Toronto roots rock band, Enter The Haggis, has proven itself to be a true grassroots success story, and never has this been more evident than with the group’s latest release, The Modest Revolution. Inspired entirely by the content of one Canadian newspaper, and funded entirely through the generous contributions of loyal fans, The Modest Revolution represents the latest step in the group’s exciting musical journey. Seven albums and a decade plus on the road have seen Enter The Haggis evolve from wildly popular local band to established international touring act, with a sound that lies somewhere between the fiercely creative and contemporary soundscapes of Radiohead, and the heartfelt story-telling and infectious grooves of The Band. 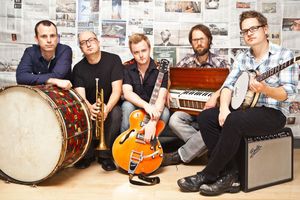