*Due to unforeseen circumstances, this show has been rescheduled from 2/21/20 to 1/24/20. All tickets purchased for the original date will be honored for the new date. Refunds are available upon request until 12/18/19.*

Epic in sound and kaleidoscopic in vision, the eclectic Martha’s Vineyard-based six-piece Entrain has been thrilling critics and fans alike since its inception.

Entrain’s visibility had increased a few years ago, as their song “Dancin’ in The Light” had been featured in a national TV and radio commercial for the Sylvania Light Company. Also, several tracks from their fourth CD “All One” are featured in the Artisan film “Cutaway,” an action-thriller starring Stephen Baldwin, Tom Berenger and Dennis Rodman. “Cutaway” premiered in May 2001 to strong reviews at the Cannes Film Festival. Producer Richard Glasser personally chose to feature the album’s shimmering title track prominently in the film. The anthemic “Arm Yourself” and the ska tinged “Jolly Green Giant” are included in the film.

Since its inception, Entrain has jammed with the likes of singer/songwriter James Taylor, Grateful Dead alum Bob Weir and rock legend Bo Diddley, and amateur saxophonist and professional leader of the Free World Bill Clinton. Entrain continues to perform as a hugely popular live act throughout the northeast and mid-Atlantic, and in 1995 the band garnered a Boston Music Award for Best Live Show. Before their appearance on the “Cutaway” soundtrack, Entrain’s music was used as the theme song for MTV’s Real World Hawaii. Their t-shirts, bumper stickers and posters have been featured on the popular WB series “Buffy The Vampire Slayer.” Entrain has also starred in and performed a memorable TV commercial for one of the nation’s leading furniture retailers, which aired during the 1999 Super Bowl.

With that in mind, Entrain has been working on a multi-media show called “Entrain’s Dancin’ in the Light,” using projected video images behind the band to help emphasize the band’s message of peace, love, unity, and a greener earth. 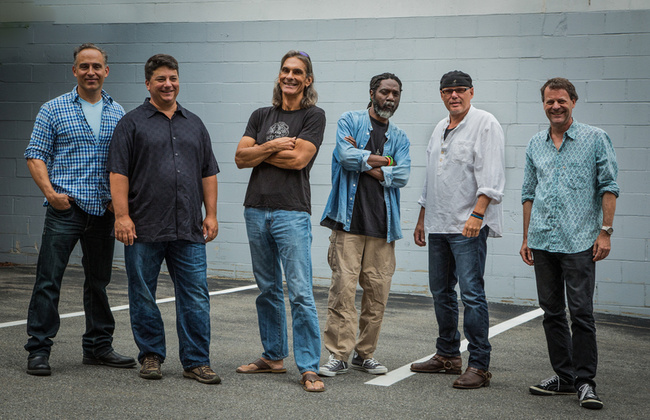