Two of the most celebrated guitarists on one stage! Eric Johnson’s stature as one of the premier guitar players in contemporary music is his artistic trump card, backed by a Grammy Award and five nominations, platinum album, Top 10 hits like ‘Cliffs Of Do-ver,’ praise from critics and the esteem of his peers. But the full hand of his talents marks him as well as a gifted songwriter, dynamic live performer, singer, pianist, song interpreter, and creator of a rich and diverse musical legacy. His myriad and distinctive musical gifts are vividly evident on Johnson’s aptly titled new album, Up Close, released on his own Vortexan Music label via EMI Distribution. The new 15-track disc finds the noted master craftsman cutting loose, roaming through variations on the rock, blues, pop, country and jazz all found at the core of his sound, pushing the dynamic range of his artistry, and mixing it up with such friends and peers as guitarists Jimmie Vaughan and Sonny Landreth and guest singers Steve Miller, Jonny Lang and Malford Milligan.    In a career that spans three decades and a discography that includes more than a dozen eclectic and innovative recordings, six-time GRAMMY nominee Mike Stern has established himself as one of the premier jazz and jazz-fusion guitarists and composers of his generation. His acclaimed 1993 release, Standards (And Other Songs), earned him the pick of Best Jazz Guitarist of the Year by the readers and critics of Guitar Player magazine. He followed that up with two hard hitting offerings ‘ Is What It Is in 1994 and Between The Lines in 1996 ‘ both of which scored GRAMMY nominations. In 1997, he recorded Give And Take with bassist John Patitucci, drummer Jack DeJohnette, percussionist Don Alias and special guests Michael Brecker and David Sanborn. Their freewheeling covers of Sonny Rollins’ ‘Oleo,’ John Coltrane’s ‘Giant Steps,’ Cole Porter’s ‘I Love You’ and Jimi Hendrix’s ‘Who Knows’ helped Stern earn the Orville W. Gibson Award for Best Jazz Guitarist that year. Stern’s ninth release for Atlantic was a six-string summit with colleagues Bill Frisell and John Scofield that was appropriately titled Play. His Voices (2001) release, his first foray into vocal music, was also another GRAMMY nominee. 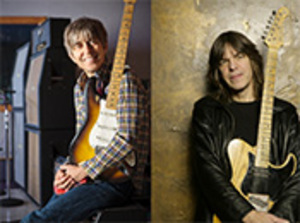