FODfest is an annual concert tour honoring the life & ideals of the late Wall St. Journal reporter Daniel Pearl, who lost his life to terrorists in Pakistan in 2002. In addition to being a journalist, Danny was a talented musician who played a variety of instruments including fiddle & mandolin, and was a classically trained violinist. Wherever he lived, Danny was actively involved in the local music scene, and wherever he traveled, he sought out local jam sessions. FOD is an acronym for Friends of Danny and the concert tour features many of the musicians who played in bands or jammed with Danny while he was alive, as well as many who never knew him but connect with his story. FODfest is a unique performance format: part song-swap, part jam session, part concert. Most of the participating musicians are meeting for the first time on stage. Artists scheduled to appear: Aidan O’Brien, Austin & Elliot Chuck Melchin, Casey Desmond, Chad Hollister, Chris Merenda Keli Mercadante, Nik Rael, Sam Weiser (2008-2009 Daniel Pearl Memorial Violin Recipient), SONiA of Disappearfear,Todd Giudice, Todd Mack 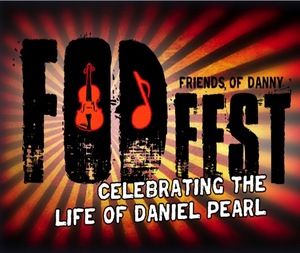