Freakwater was formed by Janet Bean and Catherine Irwin in 1989 and has been innovating and reinvigorating alt-country ever since. Following two records on Amoeba Records, the duo signed to Thrill Jockey in 1993 for the seminal Feels Like the Third Time, which was reissued on vinyl for Record Store Day 2012. The record opens with ‘My Old Drunk Friend,’ perhaps the greatest song Hank Williams never wrote and features seven originals and five covers of songs by the likes of Conway Twitty, Woody Guthrie and Nick Lowe. 1995’s Old Paint showed the group’s songwriting coming into its own, and was their most critically acclaimed album to date. 1998’s Springtime saw the addition of Wilco’s Max Konrad Johnston to the group, and features some of the band’s most heartbreaking and beautiful songs, including the now classic ‘Louisville Lip.’ The group expanded their sound on End Time, adding drum kit, organ, and even strings on several songs. The early aughts saw Bean and Irwin each releasing solo albums, Dragging Wonder Lake and Cut Yourself a Switch respectively. Both records showed each musician exploring different facets of the sound cultivated in Freakwater: Irwin a stripped down, appalacian vision of folk music, and Bean an artfully crafted, cosmopolitan type of pop. In 2005 the group released Thinking of You, a collaboration with members of fellow Thrill Jockey group Califone. After a long silence, Irwin finally released her second solo release, Little Heater in September of 2012, which Oxford American said, ‘will leave you aching for a broken heart so you too can sing wrenching songs about love and loss.’ Freakwater will be embarking on a tour January 2013, their first in four years. 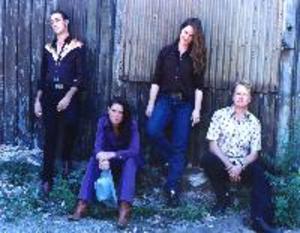