Drummer Gerry Gibbs grew up in a jazz family. His Dad, Terry Gibbs, now 90, recorded and performed with Charlie Parker, Benny Goodman and most of the greats of the last 60 years. As a young teen, Gerry worshipped jazzmen, and not the sports heroes that his friends idolized. His favorites early on were bassist Ron Carter and pianist Kenny Barron, who have performed with each other, on and off, over 4 decades. In 2012, Gerry approached his heroes with the idea of making a recording. Gerry carefully selected and arranged a mix of standards, jazz tunes, R&B and ballads, and even composed a couple for the session. The result, ‘Gerry Gibbs Thrasher Dream Trio,’ on the Whaling City Sound label, got glowing reviews, lived at the top of the JazzWeek radio charts for 6 weeks, and most recently garnered a Grammy nomination. The follow-on CD, ‘We’re Back,’ camped out for 7 weeks in the #1 spot and still lives on the charts weeks later. No other group or artist has spent more time in the #1 spot over the last few years. In spite of the critical acclaim and exceptional radio play, the band has not performed in public until now. The Narrows is pleased to present this remarkable trio in its premier performance outside of the studio. 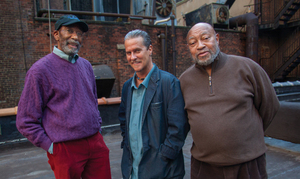