Love and Protest: two concepts that seldom go hand in hand. Until you think about it a while.That’s what singer, guitarist and songwriter Ward Hayden did as he began mapping out plans for Girls Guns & Glory’s next album, which happens to be called Love and Protest.

“That title sums up this album and it sums me up very well too,” he says. “We’ve done 10 years of touring, living, learning and growing, maturing and developing a broader world view, a view outside of the small town where I grew up.”

That decade began with Hayden and several like-minded musicians getting together. Their love for early rock ’n’ roll, true country, raw blues and pretty much any kind of authentic American music branded them quickly as anomalous — and electrifying. Since that time they’ve barnstormed far beyond their Boston hometown, playing honky-tonks, beer joints and more recently concert venues throughout the U.S. They’ve amassed a loyal legion of fans along the way. The media have noticed too, including Rolling Stone, which heralds them as a “modern-day Buddy Holly plus Dwight Yoakam divided by the Mavericks.”

Now, in this milestone year, with Girls Guns & Glory recording for the first time on its own label, the group has channeled all it’s experienced into its most personal and, paradoxically, hardest-rocking release to date.

“Love and Protest is the name of the album because its songs explore the emotion of love,” Hayden explains. “And when love is faced with opposition, it’s the protest of that emotion. It’s alpha and omega — love and protest. There’s a lot of ground to cover between those two extremes.”

They begin with the album’s first single and opening track. “Rock ’n’ Roll.” With bassist Paul Dilley and drummer Josh Kiggans laying down a no-nonsense, backbeat-driven groove, lead vocalist and guitarist Hayden sings, “I’m a hunter, a collector of things. I keep holding onto bad memories.” And yet, when the chorus hits, he proclaims that he’s “ready to rock ’n’ roll.”
Like much of Hayden’s work, these lyrics run deeper than they seem at first listen, with a sub current of heartbreak and obsession. “I don’t just collect physical trinkets,” Hayden notes. “This song is more about experiences and memories, the things you can’t see but they stay with you in your head and your heart.
Similar spirits haunt the bitterly self-destructive “Wine Went Bad,” the loneliness of “Reno, Nevada” (“I might as well be a world away”), the exquisitely pure honky-tonk lament “Empty Bottles,” the painful introspection of “Memories Don’t Die” and “Stare at the Darkness,” and “Diamondillium,” a dystopian meditation shaded by noir guitar and incongruously inspired by an episode of Futurama — really, everything on the album, including its one cover, a resurrection of Gram Parsons’ “Hot Burrito No. 1.”

“The growth and maturity of Girls Guns & Glory as a band is what led us to take on this song,” Hayden says. “Lyrically, I think it’s a song that would make Hank Williams proud. Love was, and is, there in the person telling the story, but his love interest has taken the things she’s learned from their relationship and moved on to someone else. The storyteller is left to pine over it. It’s love and protest exemplified.

To complement the immediacy of Hayden’s words, Girls Guns & Glory elected to cut Love and Protest entirely in analog, with Drew Townson, an acknowledged master of that format, recruited to produce with the band.

“There’s a nostalgia to working with analog,” Hayden says. “There are also limitations — no editing, making sure you don’t run out of tape. But those limitations force you to let things go, let things happen. The anxiety begets beauty and makes the band do its best every take, firing on all cylinders and working together as a cohesive unit.

“It’s as stripped-down as we’ve ever been. Even going into it, I didn’t imagine it would turn out as pure as it did.”

Going back to analog parallels the band’s return to its earliest days as an independent act, in control of its career. “This is the first album in eight years where we did everything ourselves,” Hayden says. “It’s the first album we’ve co-produced. We don’t worry about appeasing a label anymore. We’re creating music only for ourselves and our fans.”

To illustrate, he points to one track, “Man Wasn’t Made,” an affirmation that “man wasn’t made to just lie down and die,” set to a rollicking rockabilly beat and ignited by sparks of steel guitar. “When we were working with a label, they kept telling me that protest songs don’t sell so they didn’t want to put this kind of cut on a record. Well,” he says, smiling, “now we can sneak in a couple of actual protest songs, in a not-so-sly way.”

“With this record, we feel almost like a brand new band,” he continues. “We take things in a different direction. A lot of that is because a shift has occurred on our tours. We’re getting out of the bars and playing more in theaters and listening rooms. Instead of just trying to keep people on the dance floor for three hours, we’re crafting songs for people who really like to listen. That’s allowed us to dig deeper lyrically, to make more mature music with a higher level of musicianship. We’re making the music we want to make. We’re not limiting it to any genre in particular. We’re willing to do whatever feels right.”

“You could say,” Hayden concludes, “we’re a bigger part of the music itself than we’ve ever been.”

Nothing could be better news for those who have loved Girls Guns & Glory. Nothing can give more hope to all still waiting for their faith in real, honest-to-God American music to be restored. 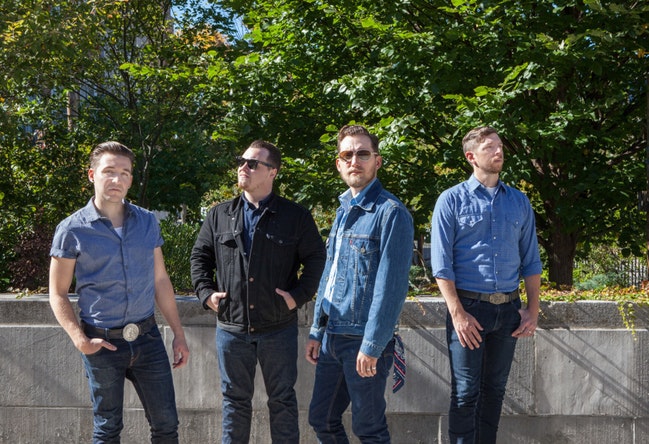