Greg Abate resides in Rhode Island, but spends very little time there. He tours, performs to sold-out crowds, and records all over the world. The list of bandmates on his CDs reads like a ‘who’s who’ of jazz masters, including pianists Kenny Barron and the late James Williams, saxophonists Phil Woods, Richie Cole and the late Benny Carter, and trumpeter Claudio Roditi. His latest band is a dream trio of jazz giants based in the Boston area including pianist Tim Ray, bassist John Lockwood and drummer Mark Walker Following the death of longtime jazz innovator and icon John Coltrane, his longtime drummer Elvin Jones tapped the teenage Dave Liebman for Elvin’s first band and recording. Liebman also toured and recorded with Miles Davis shortly after the seminal Bitches Brew sessions. He has over 200 CDs as a leader, and appears on 500 more. After maintaining his own solid band for over 20 years, Liebman has launched a new group, ‘Expansions,’ with his breakthrough ‘Samsara’ CD on Whaling City Sound. Never one to rest on his laurels or the music in his significant past, Liebman remains a spiritual and musical leader for younger and older musicians who want to forge their own paths rather than follow. Rounding out Expansions are newcomers and veterans alike: saxophonist Matt Vashlishan, pianist Bobby Avey, bassist Tony Marino and drummer Alex Ritz. The excitement will be tangible and the evening historic: a chance to see two saxophone veterans and their latest bands, both of whom have never sounded stronger or have been more committed to their art than they are today. 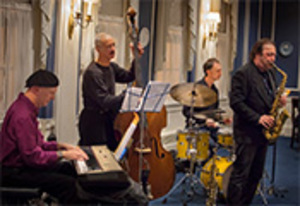