The triple-threat artists — guitarists, singers and songwriters — will each perform individual 20-minute sets (Robinson as a soloist, Parnell as a duo with keys, and Ford as a trio with bass and drums), before joining forces together as one 6-piece band for a 40-minute set to close out the show in supergroup fashion.

Tickets are $55 in advance; $60 day of show. Click here to get your tickets before they’re gone!

Robben Ford was dubbed by Musician Magazine as “ one of the top 100 guitarists of all time.” He has played with artists as diverse as George Harrison, Miles Davis, Joni Mitchell, Bob Dylan and Bonnie Raitt.

Robinson is an Australian prodigy who, at the ripe age of 11, met acoustic virtuoso Tommy Emmanuel — a few years later, the two started playing shows together and just after turning 17-years-old, Robinson won Australia’s Got Talent. 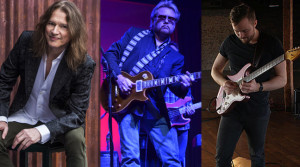