Hands to the Loom: Weaving a Collective Memory

Hands to the Loom: Weaving a Collective Memory is a project undertaken by the dyer and weaver, Rhonda Fazio, whose studio is located in Narrows Center for the Arts. It was a ‘call to arms and hands’ to creatively reconnect the citizens of the South Coast with the region’s historical textile legacy. Visitors had the opportunity to share a word, memory, names, or tasks relating to the textile mills that were once a dominant piece of the city’s economic structure. The response of each participant was written on a strip of cloth and woven into the artist’s loom by the individual. The project aims to reclaim the experience of hand weaving in a post-industrial community. It has resulted in a permanent piece of art, a woven memory, for the city of Fall River. Textile manufacturing began as a cottage industry taking place in homes prior to the Industrial Revolution. As textile manufacturing transformed into the standardized production of cloth, increased product and profit diminished the process and value of the hand woven, replacing it with machine made cloth. The city of Fall River, once an economic powerhouse of textile mills, became a shell of its former ranking as a leader in America’s economic system. Mill buildings began to shut down, some rather abruptly, people lost their jobs permanently, materials and equipment sold and shipped elsewhere in the world, thus solidifying the economic and class division that persistently underlines the American culture. What was once ‘made in America’ is now made for Americans. This has been an opportunity for people to express how they feel living amid the vacant, industrial landscape ‘ nearer to our living history rather than a distant memory. This project is supported, in part by a grant from the Fall River Cultural Council, a local agency supported by the Massachusetts Cultural Council. Opening Reception: Saturday, December 14 from 12 to 3 p.m. Light refreshments will be served. 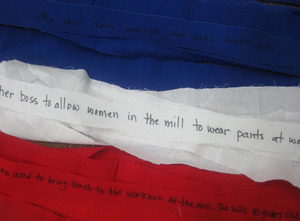