Since their first recording in 1998, Austin-based Hot Club of Cowtown have grown to be the most globe-trotting, hardest-swinging Western swing trio on the planet. The first American band to tour Azerbaijan, they have opened stadiums for such artists as Bob Dylan and Willie Nelson and continue to bring their unique brand of Western swing to a wide range of festival audiences all over the world. But for guitarist Whit Smith, fiddler Elana James and bassist Jake Erwin, it has always been about staying true to their roots. Remaining willfully out of the musical mainstream, Hot Club of Cowtown have created an international cult following for their sonic personification of joy and unique sound inspired by their namesakes: ‘Hot Club’ from the hot jazz guitarist Django Reinhardt and violinist Stephane Grappelli’s Hot Club of France, and ‘Cowtown’ from the Western swing influence of Bob Wills and His Texas Playboys. Though Wills’ pre-WWII recordings have always been the fundamental inspiration for Hot Club of Cowtown’s repetoire and style, it has taken the band a dozen years to fully honor the King of Western Swing. A fortuitous tour in England in the spring of 2010 led them to London’s Specific Sound studio, where they spent two days recording a 14-song marathon of Bob Wills tunes. The result, What Makes Bob Holler, is a tribute to the American music icon, respecting Wills’ legendary music while putting Hot Club’s own signature on each song. ‘We have been meaning to make this album for a long time,’ says James. 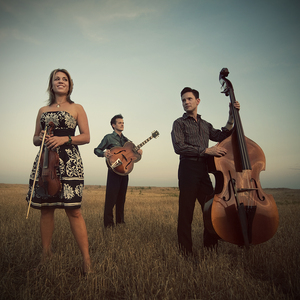