Ikebe Shakedown plays with elements of cinematic soul, Afro-funk, deep disco, and boogaloo in all the right ways. The group has forged its unique sound together over four years, developing a mighty horn section anchored by tight, deep-pocketed grooves.

“Ikebe Shakedown has a sound that is undeniably all their own” – KEXP, Seattle

Over the past ten years, Ikebe Shakedown has refined a sound that defies genre. Their tracks bring the primal elements of ’70s soul, raw funk, and cinematic Western soundtracks together with a relentless groove and soaring melodies. Each release has successively pushed their explosive instrumental style further, wowing audiences in the U.S. and around the world. Now, after considerable time building their own analog studio, Hive Mind Recording, hitting the road with some of the most revered acts in the Brooklyn soul scene, and soaking in the wisdom that comes from day-in, day-out living in NYC, the band is back with their third LP, The Way Home, (Colemine Records), an album that takes these sensibilities to new heights for a sound so hot, you’ll need to scrape the wax off your turntable.

While the band has always been known for danceable grooves, The Way Home delves deeper into what it means to move people. As they put it, “We live in a city with a relentless pace. Sometimes, that demands music that gets you up and shaking, but it’s just as much about getting ourselves up everyday to take on this massive life in just a few square miles.” It’s that joyful struggle that keeps the record from being just another love letter to New York. Says the band, “We needed to tell NYC that our feelings are a little more, well, complicated.”

Perhaps that’s why each song tells its own story, from the get-off-your-ass snare hits of “Penny the Snitch” to “She’s Knocking,” with its quiet-morning start that transitions to a glorious call to arms. Or “Blue Giant,” which boxes like Ali, floating until it stings you with full-band jabs. And though there may be more subdued moments, no song ever goes completely still – because NYC never stops. As the band says, “Some tracks are for those predawn hours, when someone’s still out there, keeping the city humming.”

The album’s first 45, “Supermoon” b/w “The Ally,” is a powerful assertion of the band’s place amidst the top of the instrumental scene. With “Supermoon,” premiering on The Big Takeover, the band aimed to make, “A tune that expresses all the energy and excitement we feel moving through the city. From the opening wash of reverb to the last pummeling drum hits, we gave it an air of mystery, since we live somewhere where anything’s possible at any time, day or night.” For “The Ally” on the B-Side, the band sees it as the perfect complement to “Supermoon” — “We want to take the the listeners on a journey from a barebones opening to an ending that rouses them from the stupor we sometimes find ourselves in, so they feel like they can take on the world.”

If you think you know Ikebe Shakedown, check out The Way Home and prepare to be awakened. And if you’ve never listened, welcome to a sound that’s richly familiar but unlike anything you’ve heard before. 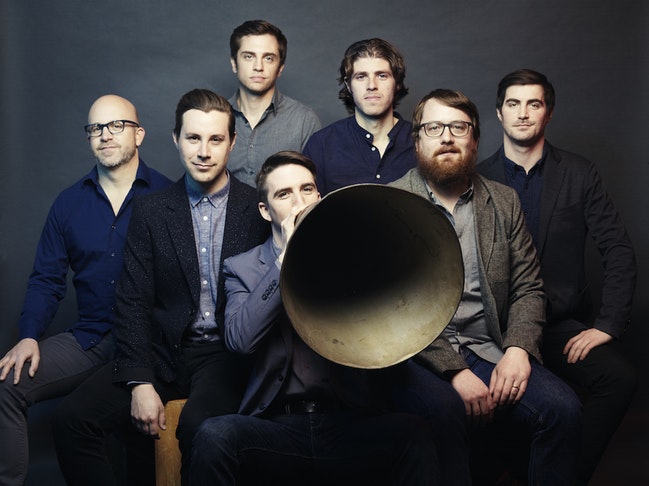