These four musicians are musical chameleons who can move crowds in small jazz clubs, big rock clubs and performing arts theaters. JFJO may be dropping jaws while opening up for Sound Tribe Sector 9 or they may be receiving multiple standing ovations while opening up for Al Di Meola – all in the same week of touring. They have been celebrated by the jazz world – playing regularly at NYC’s Blue Note and the now defunct Tonic, in some of Europe’s biggest jazz theaters, and appearing in major jazz magazines such as Downbeat and JazzTimes – but they also have found success and audiences in the jam scene – playing large festivals and performing with the likes of Steve Kimock and Les Claypool. 2008 found JFJO winning a Guinness jazz Award for their performance at the Cork Jazz Festival in Ireland, and performing festivals such as the 40th Umea Jazz Festival in Sweden, and the prestigious Newport Jazz Festival in Rhode Island. 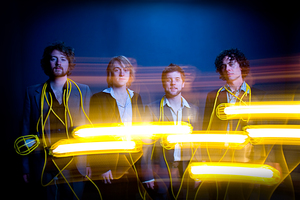