The son of acclaimed author Larry McMurtry (Lonesome Dove, Terms of Endearment), James grew up on a steady diet of Johnny Cash and Roy Acuff records. His first album, released in 1989, was produced by John Mellencamp and marked the beginning of a series of acclaimed projects for Columbia and Sugar Hill. In 2004, McMurtry released the universally lauded Live in Aught-Three on Compadre Records. 200’s Childish Things garnered some of the highest critical praise of McMurtry’s career and spent six weeks at No. 1 on the Americana Music Radio Chart in 2005 and 2006. In September 2006, Childish Things and ‘We Can’t Make It Here’ won the Americana Music Awards for album and song of the year, respectively. McMurtry received more Americana Music Award nominations for 2008’s Just Us Kids. The album marked his highest Billboard 200 chart position in more than 19 years. The Washington Post noted McMurtry’s live prowess: ‘Much attention is paid to James McMurtry’s lyrics, and rightfully so: He creates a novel’s worth of emotion and experience in four minutes of blisteringly stark couplets. What gets overlooked, however, is that he’s an accomplished rock guitar player. At a sold-out Birchmere, the Austin-based artist was joined by drummer Daren Hess and bassist Ronnie Johnson in a set that demonstrated the raw power of wince-inducing imagery propelled by electric guitar. It was serious stuff, imparted by a singularly serious band.’ 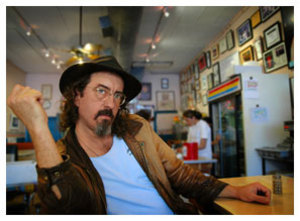