“I want to take people to places they haven’t been.” Jesse Cook, Juno winning master guitarist, known for his intoxicating fusion of world music, has travelled the globe looking for sounds that resonate with him. “I like finding common ground for different music traditions, a space where music from around the world can come together,” Cook explains. “A place where modern sounds can mix with ancient timbres.”

“There are many borders in our lives. Some others have built, some we create for ourselves. Whenever I ventured beyond the borders of my life, I have been the better for it. I grew up in the cold war, in a world of walls and borders. But then people began to change the way they thought. The walls came down. Europe united, and people began thinking of themselves as global citizens. The rising nationalism of today is exploiting our differences, not celebrating them. We are back to building walls, and I don’t want any part of it. Humanity, artistry, joy, and of course, love…these things don’t stop at some line on the map. If music is the universal language, maybe there is something it can teach us?”

Cook also helps foster this spirit of cultural exploration visually through his photography on Instagram as well his popular weekly video releases on his YouTube channel and through Facebook. He was born in Paris, to Canadian parents. The family moved to southern France, where they bought a small home built in the 16th Century, for 100 dollars. “It was like stepping into the Middle Ages,” Cook recalls. “Manitas de Plata was popular then, and it was his albums got me interested in the sound of flamenco guitar.”

After moving back to Canada, Cook started guitar lessons. “My teacher played flamenco. Then, when I’d visit my dad in France, he was living next door to Nicolas Reyes, the singer of the Gipsy Kings. I saw gipsy kids on the corner playing that way too.” It was as if the world conspired to get me interested in this style and I was hooked.” It was when he heard the Paco de Lucia, Al Di Meola, John McLaughlin album, Friday Night in San Francisco that the die was cast. “I was captivated by the sheer virtuosity and freedom, that people could play whatever they wanted, creating in that space between jazz and flamenco.”

Cook studied classical guitar at the Royal Conservatory of Music, moving on to York University, and jazz at Berklee College in Boston. On his albums, and in concert, Cook explores the roots of flamenco, and it’s many offshoots, from India to Spain, and on to Cuba and Latin America. Along the way, he developed his signature synthesis of world music. He has released ten genre-defying albums, garnering eleven Juno (Canada’s Grammy) nominations – and one win, in 2001 for Free Fall – in the World Music and Instrumental categories.

As Cook reflects back on his journey so far, “Music has a way of touching your soul, and every tradition on earth has its own way of doing that. When we venture beyond our cultural and geographic borders, we can gain the whole world.” 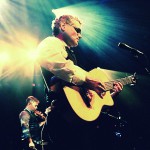